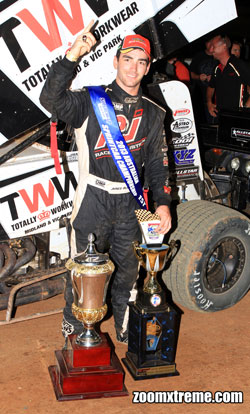 From the management and staff of Supercheap Auto Archerfield Speedway, congratulations James McFadden on your victory in the Australian Sprintcar Championship!

A hot favourite for the Championship after his Australian Sprintcar Open win at the venue a week before, McFadden started on the front row alongside David Murcott in the forty lap Championship Final and put in an outstanding drive to catch Murcott in lapped traffic, taking the lead with six laps remaining and going on to take the chequers by a little more than half a second.

The victory was McFadden’s second in the Australian Championship and proved to be a very popular one with the large crowd on hand to witness the 51st running of Australia’s most prestigious Sprintcar event.

Murcott can consider himself unlucky not to be waking up on Sunday morning as the Champion after putting in one of the very best drives of his career only to come up one spot short, at times holding on to significant leads only to have McFadden close in traffic and ultimately James timed his run to perfection. David showed his class and talent and will leave Brisbane with many new fans.

Third across the line was Steven Lines followed by previous Australian Championship winners Kerry Madsen, Robbie Farr and Brooke Tatnell with Andrew Scheuerle, six-time Champion Garry Brazier, three-time Champ Max Dumesny and Trevor Green completing the top ten. Tatnell’s reign as National Champion came to an end with a barnstorming run from twenty-first to sixth after earlier competing in the C-Main and taking the provisional provided to him as the defending Champion.

With the Championship run and won, it also brings the annual Summer Of Speed at Qld’s Home Of Speedway to a close for another year. It’s been nine nights of racing in eighteen days and has delivered arguably some of the best Feature races ever seen at the venue with multiple racing lines providing drivers from around Australia and the United States opportunities to showcase Sprintcar racing at its best in front of near-record crowds.

Again, congratulations to James on his win but also congratulations to each and every driver who competed, thanks for the show you put on for the fans. Thanks also to all the officials, staff and volunteers who came together to make the Championship and the entire Summer Of Speed schedule a success, your assistance as always is greatly appreciated.