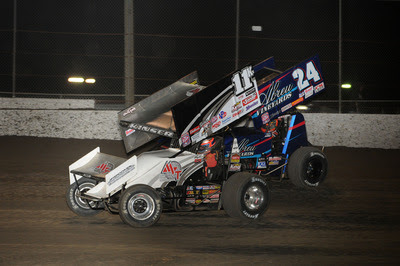 BLOOMINGTON, Ind. — Feb. 17, 2014— Facing stiff competition night in and night out is what the DIRTcar Nationals Presented by Summit Racing Equipment at Volusia Speedway Park in Florida is all about. Drivers from coast-to-coast head to the Sunshine State to open their season and this ramped up level of competition is a great way for a driver to prepare for the rigors of the World of Outlaws STP Sprint Car Series season. That’s the approach that Kraig Kinser takes. When the final checkered flag of the 2014 DIRTcar Nationals Presented by Summit Racing Equipment flew on Sunday, Feb. 16, the third-generation had earned a pair of top-10 finishes in the Mesilla Valley Transportation/Casey’s General Store/King Racing Products Maxim.

The finale of the DIRTcar Nationals Presented by Summit Racing Equipment saw Kinser record his second ninth-place finish of the week. That run marked his first top-10 performance of the season with the World of Outlaws STP Sprint Car Series. Kinser took the green flag in the 15th position and worked his way into the top-10 by just the fourth circuit. He would run among the top-10 for the remainder of the 30-lap A-Feature, crossing the line ninth.

Kinser opened the final night at Volusia by turning the eighth-fastest lap in time trials of the 34 entries. He followed that up with a third-place showing in the fourth heat race to earn a spot in the main event.

Kinser opened the DIRTcar Nationals Presented by Summit Racing Equipment with a ninth-place finish with the UNOH All Star Circuit of Champions on Thursday, Feb. 13. The native of Bloomington, Ind., began the night as the 12th-fastest driver of the 43 entrants during time trials. He worked his way from the fourth starting spot to finish second in the fourth heat race to earn a spot in the A-Feature. In the main event, Kinser started eighth and ran among the top-10 for the entire 30 laps, taking the checkered flag ninth. The originally scheduled opener for the All Stars on Wednesday, Feb. 12, fell to rain and was not rescheduled.

On the opening night of the 2014 World of Outlaws STP Sprint Car Series season, Friday, Feb. 14, Kinser finished 17th after starting 23rd. He timed in 25th-quickest of the 37 drivers that hit the half-mile. Kinser started seventh in the first heat race and finished in that same position, which put him in the B-main. He started fifth and finished fourth in the B-main to earn a spot in the 30-lap main event.

Kinser finished 15th on the second night of the World of Outlaws STP Sprint Car Series season on Saturday, Feb. 15. He timed in 20th-fastest of the 35 entries that took qualifying laps. Kinser finished fourth in the fourth heat race to punch his ticket to the main event. He lined up 19th and was able to gain a few positions to finish 15th.

“The week didn’t go quite as well as we would have liked, but we have something to build on,” said Kinser. “We got better as the week went on and qualified among the top-10 on the final night and that put us in a much better position, though we still started in the middle of the field for the feature. We have a couple weeks now to get ready for Las Vegas and definitely learned a few things in Florida that we can apply when we head out there. The main thing is still qualifying up front and getting in the dash and that’s what we are looking to do out west.”

Kinser, who is currently 13th in points with the World of Outlaws STP Sprint Car Series, just 12 markers out of the top-10, returns to action with the series in the FVP Outlaw Showdown at The Dirt Track at Las Vegas Motor Speedway, March 5–6.