A Solid Night for Kraig Kinser Finishing Seventh at I-96 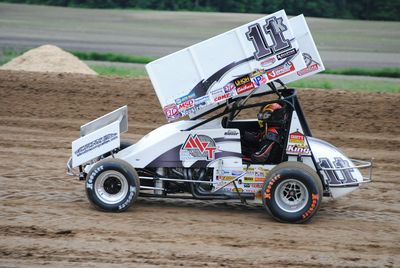 BLOOMINGTON, Ind.—June 2, 2013— It was all about speed for Kraig Kinser and the rest of the World of Outlaws STP Sprint Car Series contingent on Saturday, June 1 at I-96 Speedway in Michigan. Back on the half-mile for the first time since 2011, a new track record was set in qualifying on a blazing fast surface, but even more important, was the brevity of the racing program, as rain was on the way, with track and series officials doing everything possible to complete the full racing program. They were able to achieve that and when the final checkered flag of the night flew, Kinser recorded a solid seventh-place finish.

“We were glad to get the race in, especially after losing Friday night to weather,” said Kinser. “It was good to get back on the half-mile at I-96 and the car came really came on later in the feature. The track was fast, but it was also pretty tricky, especially the cushion, and you had to really hit your marks. We are getting closer to where we need to be and we have a lot of races coming up, so we just have to keep at it and continue to work hard.”

The third-generation driver lined up 14th for the 30-lap A-Feature in the Casey’s General Store/Mesilla Valley Transportation Maxim. He dropped back to 15th at the start and ran there for the first three laps. Following a restart on the fourth circuit, Kinser moved up a spot and was running 13th when the second yellow flag of the night came out on lap-14.

After a couple of drivers headed to the work area with flat tires, Kinser restarted in the 13th position and powered his way up to ninth when the green flag came back out. He battled David Gravel late in the going for the eighth spot and wound up finishing seventh when one of the drivers in the top-five ran out of fuel on the final lap. For Kinser, the seventh-place showing was his fifth-career top-10 finish at I-96 Speedway, with four of those coming on the half-mile.

“I was glad it was a 30-lap race, as we were able to get a few spots in those last five laps,” noted Kinser. “We had a couple of pretty good restarts and were able to take advantage of a little attrition as well to gain a few spots. Any way that you can gain a few spots always helps with how tough the competition is out here.”

Kinser opened the night at I-96 by timing in 14th, which was two spots shy of making the heat race inversion. He lined up fifth in the second eight-lap heat race and after getting over the banking in turn four early in that contest, finished seventh.

“Qualifying is still the key with the World of Outlaws and we still need to get a little better on our qualifying package,” he shared. “We were a couple of spots away from being in the inversion and starting on the front row of a heat race. Getting in the dash with these guys is very important and that’s how you give yourself a chance to be in contention.”

Kinser is currently 11th in the World of Outlaws STP Sprint Car Series championship standings on the strength of 13 top-10 finishes, with four of those being top-five performances. He returns to action this week on Wednesday, June 5 at Kokomo Speedway in his home state of Indiana, before heading to 34 Raceway in Iowa, Lakeside Speedway in Kansas and I-80 Speedway in Nebraska.