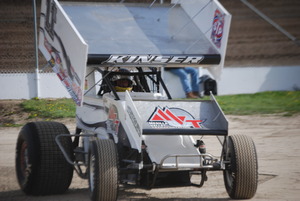 BLOOMINGTON, Ind.—May 14, 2013— Five races in seven nights. If it was up to Kraig Kinser and just about most other drivers that’s how every week would be on the World of Outlaws STP Sprint Car Series trail. For one week, the drivers will get their wish as the first East Coast Swing of the season will find the series hitting the track for five nights of racing at four different venues over the course of a one week period.

The East Coast Swing opens for Kinser aboard his Casey’s General Stores/Mesilla Valley Transportation Maxim on Wednesday, May 15 at Lincoln Speedway in Abbottstown, Pa. The series then heads to the legendary Williams Grove Speedway in Mechanicsburg, Pa., for a two-night event on Friday, May 17 and Saturday, May 18. An overnight trip to New York will find the World of Outlaws STP Sprint Car Series at Orange County Fair Speedway in Middletown on Sunday, May 19. A return to New Egypt Speedway in New Jersey for the first time since 2007 is set for Tuesday, May 21.

“Along with being most of the busiest stretches of the season, the next week will be one of the toughest as well in terms of the competition we’ll face night in and night out,” said Kinser. “The guys in Pennsylvania know Lincoln and Williams Grove so well and they take a lot of pride in defending their home turf. We have to really be on our game heading out there.”

Kinser made his debut at Lincoln Speedway last season, as the World of Outlaws STP Sprint Car Series made their first visit to the three-eighths-mile near Hanover, Pa., since 1998. He finished 24th in the main event, against a very strong field as 45 drivers who attempted to earn a spot in the 30-lapper.

The native of Bloomington, Ind., earned a pair of top-10 finishes at Williams Grove Speedway last season, including the best finish of his career at the half-mile during the Summernationals in July, when he came home fourth. Kinser followed that up by finishing seventh on the first night of the National Open in the fall. The third-generation driver has made a total of 28 main event starts at Williams Grove in his career, including preliminary features, dating back to 2003.

“We had a couple of good runs at Williams Grove last season, so hopefully we can use a little bit of what we learned on those nights when we go back this week,” Kinser stated. “First and foremost, you have to time trial well and put yourself in a position in the heat race to either make the dash or at least transfer into the feature. The whole night is a pretty intense one when you go up to Williams Grove and you have to be spot-on each time you hit the track.”

Last season Kinser finished 15th at Orange County Fair Speedway after losing a tire while running second on the final lap. He opened the event by turning the eighth-fastest lap in time trials and followed that up by winning the second heat race to earn a spot in the dash, where he came home second to secure a front row starting sport for the 25-lap main event. Kinser has made three starts in his career at Orange County, with the first of those coming in 2004, when he recorded a seventh-place finish.

“Orange County is Orange County, there is really no place like it,” he noted. “You certainly see the speed of a sprint there and the surface is pretty unique as well with how hard the clay is. Track position is pretty important there, so hopefully we can qualify in the right spot and get in the dash and have a chance to start near the front of the field.”

“The series hasn’t been to New Egypt for a handful of years, so hopefully that is a bit of an advantage for me, since I’ve never been there at all,” Kinser shared. “Racing at bigger tracks each of the three races before at Williams Grove and Orange County, we should have a good baseline to start the night with and kind of know what direction we need to go.”

Kinser heads to the East Coast 12th in the World of Outlaws STP Sprint Car Series championship standings. He has eight top-10 finishes on the year, of which three are top-five performances.