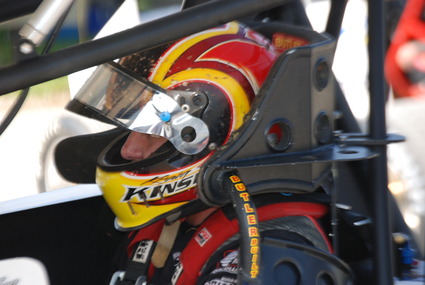 BLOOMINGTON, Ind.— June 19, 2013— Ever since he made his first start at River Cities Speedway in North Dakota, 13 years ago, Kraig Kinser has always enjoyed racing at the ultra high-banked bullring. Throughout his career, he also has taken a liking to racing at tracks he’s never been to before. He’ll get to indulge in both this weekend as the World of Outlaws STP Sprint Car Series makes their first of two stops in 2013 at River Cities Speedway, along with paying their first-ever visit at I-94 Speedway in Minnesota.

Kinser, who pilots the Casey’s General Store/Mesilla Valley Transportation Maxim, will take to the track at River Cities Speedway in Grand Forks, N.D., on Friday June 21 for the first round of the 2013 Gerdau Ameristeel Northern Tour. The series then heads to I-94 Speedway in Fergus Falls, Minn., on Saturday, June 22.

Kinser was victorious from the 10th starting position at River Cities Speedway last season on June 15, taking the leader from his father Steve with seven laps remaining. He opened the night as the fourth-fastest qualifier of the 37 drivers that were in attendance. The third-generation driver lined up third in the fourth 10-lap heat race and finished fifth in that contest to earn a spot in the dash. He started the dash in 10th and finished in that same position to earn a starting spot on the outside of the fifth row in the 40-lap main event. In the World of Outlaws return to River Cities Speedway in August, Kinser finished 16th.

“Grand Forks (River Cities Speedway) is definitely one of the most exciting tracks on the schedule,” said Kinser. “We had a great car in the feature last year to win from 10th there. You are in traffic in a hurry there and you have to be able to move around and go where cars aren’t and pick your way through. A lot happens in the driver’s seat and you really have to be sharp and stay on top of everything.”

Kinser made his debut at River Cities Speedway in 2000, with the former Gumout Series finishing fourth and fifth in two starts. In four Gumout Series starts at the track, Kinser finished in the top-five each and every time. With the World of Outlaws STP Sprint Car Series, the third-generation driver has made 10 starts, recording five top-10 finishes in the process.

The World of Outlaws STP Sprint Car Series will be making their debut at I-94 Speedway, which will mark the second track the series has visited for the first time in the state of Minnesota this season. Kinser came home 15th in the World of Outlaws maiden voyage to Elko Speedway last month, and was 16th at Jackson Speedway last weekend. In his career, Kinser has three wins when racing at a track for the first time with the series, including winning in Minnesota in 2008 at North Central Speedway in Brainerd.

“With just about everyone going to I-94 for the first time, that should equalize things a bit,” he noted. “I always try when I go to a new place to compare it to somewhere I’ve been in the past. Walking around the track in the afternoon always helps and then really watching the track during hot laps if you can before climbing in the car.”

Kinser enters the pair of events at River Cities Speedway and I-94 Speedway 12th the World of Outlaws STP Sprint Car Series championship standings. He has one win this season, along with 14 top-10 finishes with four of those being top-five showings.

“The key right now is qualifying,” Kinser stated. “We struggled again last weekend qualifying and to give ourselves a shot, we have to make it in the heat race inversion. At a place like Grand Forks (River Cities Speedway), you can make up ground starting further back, but it always helps to start up front and at I-94 (Speedway) track position will probably be very important as well.”