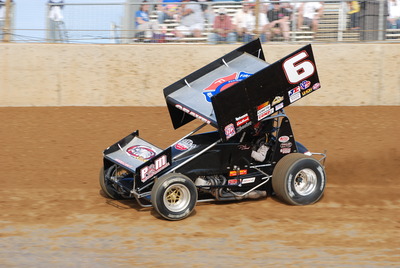 WATERTOWN, Conn. — Sept. 15, 2013— David Gravel sure was glad to return to the track this past weekend and climb into his racecar and get back in the swing of things. He was able to make a pair of starts with the World of Outlaws STP Sprint Car Series at Clay County Fair Speedway in Spencer, Iowa, and Deer Creek Speedway in Spring Valley, Minn. While he is always looking to contend for wins, his main objective this past weekend was to get seat time and re-acclimated with the rigors of competing with the World of Outlaws STP Sprint Car Series, after a month out of the seat, while recovering from a bout of mononucleosis, an enlarged spleen and a double ear infection. Gravel recorded an 11th-place finish at Clay County and was 14th at Deer Creek in the FMR Racing/JRC Transportation/Musco Fuel/Model Craft J&J.

At the drop of the green flag in the Arnold Motor Supply Shootout at Clay County Fair Speedway on Friday, Sept. 13, Gravel used a strong start to power his way into the top-10, when the first caution flag of the night flew. The field re-racked and took the green for a second time, with Gravel again charging forward, only to have the caution flag displayed. The third start stuck, and Gravel found himself eighth on the opening lap.

The 21-year-old worked his way past Kraig Kinser and Cody Darrah on the second circuit and was up to seventh at that point. Gravel fell back a couple of spots over the ensuing laps and was running ninth when the red flag was displayed on lap-7. He then fell back a few spots and ran 13th for a number of laps in the middles stages of the 30-lapper and worked his way into 12th on lap-18. Gravel was 11th just two circuits later. The East Coast racer ran 11th for the final 10 laps and crossed the finish line in that same position.

Gravel timed in ninth-quickest of the 27 drivers that took to the clock at the historic fairgrounds oval in northwest Iowa. He started on the outside of the front row in the third heat race and finished third to earn a spot in the 30-lap main event. When the A-Feature of the Arnold Motor Supply Shootout assembled on the three-eighths-mile, the native of Watertown, Conn., lined up 12th.

The event at Deer Creek Speedway on Saturday, Sept. 14 was expedited due to impending rain in the area, which began falling just as the cars took to the track for the 35-lap main event. Gravel took to the three-eighths-mile in the seventh spot and ran among the top-10 for the first few laps, before losing a handful of positions He would fall back to 17th just before the halfway point of the race and then steadily worked his way back forward running as high as 13th with just two laps to go, before finishing 14th.

Gravel opened the Asgrow/DeKalb Clash at the Creek at Deer Creek Speedway by turning in the 10th-fastest time in qualifying, which put him on the pole for the first heat. He would finish second in that eight-lapper to eventual race winner Ian Madsen. That earned Gravel a spot in the dash, where he came home seventh, after starting eighth.

Gravel will be back in action next weekend at the famed Eldora Speedway in Ohio, for the World of Outlaws STP Sprint Car Series portion of the 4-Crown Nationals. He will then head north to Lernerville Speedway in Sarver, Pa., for the annual Commonwealth Clash. Gravel has a pair of wins this season, including on the first preliminary night of the Knoxville Nationals. He has picked up 24 top-10 finishes in World of Outlaws STP Sprint Car Series competition, with seven of those being top-five performances.