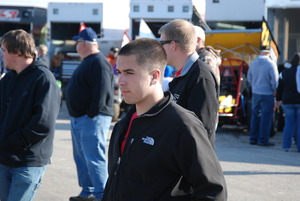 Watertown, Conn.—March 10, 2013 — David Gravel had never seen the Dirt Track at Las Vegas Motor Speedway until last Wednesday when he arrived at the half-mile for the first of two nights of racing at the state-of-the-art half-mile. Likewise, he had never been to Tucson International Raceway in Arizona. On top of that, the native of Watertown, Conn., had never sat in Bill Rose’s No. 6 car until he arrived the afternoon of the Las Vegas opener. None of that mattered though, as the 20-year-old quickly got up to speed in his first pair of races filling in for the injured driver, earning a season-best fourth-place finish on the second night of the “Sin City Showdown” and followed that up with an eighth-place showing at Tucson International Raceway.

“For being in the car for the first time it was a great three races,” said Gravel. “It’s exciting to know that we can be competitive in another car. I’m looking forward to continuing next weekend at Tulare (Thunderbowl Raceway). I’m still learning things about the car each time I’m on the track and feel more comfortable every time I climb behind the wheel. We’re only going to get keep getting better.”

Gravel began the finale of the two-night event at Las Vegas on Thursday, March 7, by turning the 15th-fastest lap in time trials, aboard Rose’s Fire Text Response Maxim, which put him on the pole of the third eight-lap heat race. He finished second in that contest to earn a spot in the dash. Gravel would come home sixth in the dash and lined up on the outside of the third row for the 30-lap main event.

The East Coast racer used a strong start to move up a spot at the start of the A-Feature. He was running fifth when the first caution flag of the night flew on the fifth lap. A long 20-lap green flag stretch of racing followed with Gravel remaining in fifth for most of those laps. The final caution flag of the night came out on lap-25. He restarted sixth and got around Wayne Johnson and Donny Schatz to move into fourth and would cross the finish line in that same position.

“The track really suited my style and our set-up in Las Vegas,” he shared. “The track was a little one groove and I went where people weren’t and was able to pass a bunch of cars. We had a really good car the first night, but our results didn’t show it, due to some bad luck. We definitely showed what we were capable of on the second night.”

Gravel earned his second consecutive top-10 finish on Saturday, March 9 in the Wildcat Shootout Presented by NAPA Auto Parts at Tucson International Raceway. He lined up 16th and quickly began moving forward. He broke into the top-10 on the sixth-lap and by the halfway point of the 30-lap contest found himself in eighth. At one point, he passed three-time World of Outlaws champion Sammy Swindell, Jason Sides, who is currently second in points, and five-time series titlist Donny Schatz on consecutive laps. In his debut at Tucson, Gravel was 16th in time trials, which put him sixth in the first eight-lap heat race in the three heat program. He finished sixth in that race to transfer to the 30-lap main event where he finished eighth.

“Most of the guys were running the bottom at Tucson and I was running the top and able to get by a lot of them,” Gravel noted. “The outside was really working for me most of the race, though I did lose a couple spots at the end. For my first time at the track I was pleased and it gives us some good momentum heading into next weekend.”

Gravel began the West Coast swing in Las Vegas with a 13th-place finish on Wednesday, March 6, battling a bent front axle and broken shock in the main event. He lined up 17th and was up to 11th by just the eighth lap. He timed in 17th on the night, missing the heat race inversion by just one spot. After finishing seventh in the first heat race, he would race his way into the A-Feature via the B-main, where he came home second.

Gravel will continue to fill in for Rose this coming weekend at Thunderbowl Raceway in Tulare, Calif., which will mark his first-ever racing trip to the Golden State. Gravel, who is contending for the 2013 World of Outlaws Kevin Gobrecht Rookie of the Year Award, is currently tied for ninth in points, just 38 markers out of the top-five.