David Gravel Set for First Trip to California; Continues to Fill-In for the Injured Bill Rose 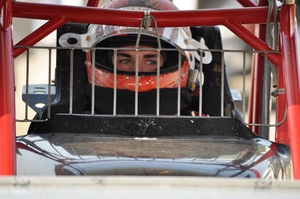 David Gravel Set for First Trip to California; Continues to Fill-In for the Injured Bill Rose
By DDR Motorsports PR

Watertown, Conn.—March 13, 2013 — David Gravel has heard and read about the sprint car racing scene in California for as long as he can remember. He has been looking for the right opportunity to race in the Golden State for the past few years. That chance will come this week as he makes his California debut at Thunderbowl Raceway as he continues to fill-in for the injured Bill Rose in the Fire Text Response Maxim on the World of Outlaws STP Sprint Car Series circuit.

The two-night event at the high-banked, third-mile Thunderbowl Raceway in Tulare is set for Friday, March 15 and Saturday, March 16 and will serve as the fourth and fifth races of the 12-race West Coast Swing for the World of Outlaws STP Sprint Car Series. Each night will be comprised of a full racing program, capped by a 35-lap A-Feature.
“I’ve always wanted to race in California, so I’m really excited to get back in the car this week and get to race there,” said Gravel. “I’ve heard that Tulare (Thunderbowl Raceway) is a pretty action-packed track and gets right up against the wall, so hopefully it suits me and we can have a strong run. We have some momentum from last weekend, so that should help as well.”

Gravel opened the World of Outlaws West Coast swing last week with a pair of top-10 showings. He finished a season-best fourth at The Dirt Track at Las Vegas Motor Speedway on March 7 and was eighth at Tucson International Raceway on March 9. In the opener at Las Vegas, he soldiered to a 13th-place finish after sustaining a bent front axle and broken shock in the main event. The 20-year-old was visiting each of those two venues for the first time in his career.

“I felt pretty comfortable in the car last week and probably will feel even better this week as I continue to make more laps in it,” he noted. “There was a big field at Las Vegas and we did okay out there, so I think we’ll be all right at Tulare as well, no matter how many cars are there.”

Thunderbowl Raceway is a high-banked, third-mile bullring and Gravel raced at tracks that size on a number of occasions in 2012. He competed in four races at Attica Raceway Park in Ohio with the UNOH All Star Circuit of Champions last year, recording a best-finish of eighth in the fall. Gravel finished sixth at Wilmot Speedway in Wisconsin also with the All Stars during the annual Thunder in the Plains. He recorded a top-10 finish at Waynesfield Raceway Park in Ohio with the All Stars during Ohio Sprint Speedweek. With the World of Outlaws he raced at Beaver Dam Raceway, a third-mile in Wisconsin, last year. In addition, Gravel has raced at Federated Auto Parts Raceway at I-55 in Missouri with the series in the past, which is very similar to Thunderbowl Raceway.

“It definitely helps having raced at places like Attica and Pevely and it’s a big benefit that my crew chief Tyler (Swank) and Bill (Rose) have both been to Tulare a number of times and know what it takes out there,” stated Gravel. “As long as we get the car pretty close, we should be okay, and then it’s up to me to adapt and get the feel of the track.”

Gravel heads to Thunderbowl Raceway tied for ninth in the World of Outlaws STP Sprint Car Series standings, on the strength of three top-10 finishes in the first six races of the year. The native of Watertown, Conn., will be contending for the Kevin Gobrecht Rookie of the Year Award this season, with the changes that were made to the rookie format prior to the season.