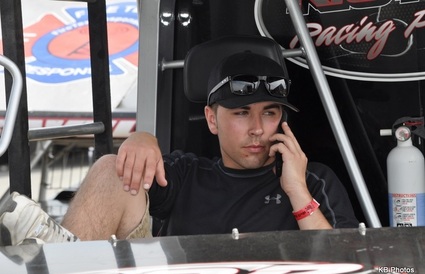 WATERTOWN, Conn.—June 12, 2013— Visiting new tracks has become the norm for David Gravel this season with the World of Outlaws STP Sprint Car Series. He’s visited 15 venues for the first time, which equates to nearly half of the races the series has contested thus far in 2013. Following appearances at three new venues last week, Gravel will buck that trend — for at least two races this weekend, away — as he’ll make a pair of stops at tracks he has raced at in the past, the historic Jackson Speedway in Minnesota, and the legendary Knoxville Raceway in Iowa.

The World of Outlaws STP Sprint Car Series will make their first visit to Jackson Speedway since 2010 on Friday, June 14, for the Eyecon Trail Cameras Presents the Big Game Shootout. The series then heads to Knoxville for their second and final tune-up for the Knoxville Nationals with the running of the Mediacom Shootout on Saturday, June 15.

Gravel, who pilots the FMR Racing/JRC Transportation/Musco Fuels/Model Craft J&J under the Bill Rose Racing banner, raced at Jackson Speedway with the UNOH All Star Circuit of Champions last season during the annual Thunder Through the Plains mini-series, finishing sixth. He opened the night by turning the fourth-fastest lap in time trials at the semi-banked, half-mile. The native of Watertown, Conn., would line up third in the first heat race and win that contest to earn a spot in the dash, where he would finish second.

“Jackson is a very big and high-horsepower track,” said Gravel. “We’re putting a new engine in for this weekend, so hopefully we can qualify up front. It’s no mystery that we’ve been struggling in qualifying and against the Outlaws you have to qualify well in order to put yourself in a position to get in the dash. Our car has been good, especially in the feature races and we’ve been able to pass cars, we just need to qualify better. The engine we’ll be using has done well at big tracks in the past.”

The East Coast racer competed at Knoxville Raceway last month, coming home 11th after starting the 25-lap main event in the 25th position. He was running third in the B-main, when a power steering line came off, forcing him to use a provisional to start the main event. A season-high 51 cars took part in that event, with a five heat race program being used. Gravel finished fifth in the fourth eight-lap heat race, coming up just one spot short of transferring to the A-Feature, as only the top-four in each heat moved on.

“We had a very good car earlier this year at Knoxville, we just had some bad luck,” he noted. “If we would have gotten in the dash that night, I think we would have had something for them. It’s good to race on the bigger tracks, especially Knoxville, to see how you stack up against everyone else. There are a lot of big events coming up in the summer on big tracks, with the (Knoxville) Nationals being the biggest and we want to make sure we are ready.”

“I’ve been to Knoxville a few times now over the last couple of seasons and feel like I get better each time I go there,” Gravel noted. “That is definitely a track where having experience is very important and you see that with the veteran drivers and how well they run there. Like I said, if we qualify well, we can put ourselves in a good position and have a chance over there.”

Entering this weekend’s two races, Gravel is seventh in the World of Outlaws STP Sprint Car Series championship standings. He has recorded 12 top-10 finishes, with four of those being top-five showings, including a season-best runner-up performance at Tri-State (Ind.) Speedway in April.