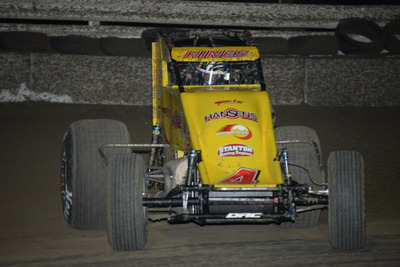 NEW CASTLE, Ind.— June 4, 2013— There are certain hotbeds of sprint car racing all across the country. They are usually divided by whether the cars have wings or not and what size engine is under the hood. One of the most storied areas is Central Pennsylvania, which has long been known for its winged 410-sprint car racing. For four nights this week, that mantra will give way to Tracy Hines and his fellow drivers of the non-wing persuasion, as the 2013 USAC Amsoil National Sprint Car Series Eastern Storm Tour rolls into the Keystone State.

The Eastern Storm Tour kicks-off for Hines aboard the Hansen’s Welding Inc. DRC with a Stanton Mopar under the hood on Wednesday, June 5 at Grandview Speedway in Bechtelsville, Pa., for the running of the Jesse Hockett Classic and continues on Thursday, June 6 at Path Valley Speedway in Spring Run, Pa. Following a day off on Friday, June 7, the third race is set for Saturday, June 8 at Port Royal Speedway, before the mini-tour concludes on Sunday, June 9 at Susquehanna Speedway in Newberrytown, Pa.

“It seems like all we’ve talked about is weather this year, so we can’t wait to get out east and race four times in five nights,” said Hines. “It’s been a couple of weeks since the last sprint car race, so hot laps will definitely be important to get back up to speed and in a rhythm. We have a good variety of tracks this year for the Eastern races and it should be a good week out there.”

Hines has made four starts at Grandview Speedway over the last four seasons. He finished fourth in his debut at the high-banked, third-mile in 2009, in the event which is part of the annual NAPA Auto Parts Thunder on the Hill Series. Hines followed that up with a sixth-place showing in 2010 and was ninth in 2011. Last season at Grandview, the native of New Castle, Ind., finished 11th after starting 14th.

“We didn’t quite finish where we were hoping last year at Grandview,” he noted. “The first couple of times there we had a really good set-up and were pretty fast. It’s good to have a baseline for a track like that since we only see it once a year and we’ll try to go off some of the things that worked in the past.”

The event at Path Valley Speedway will mark the inaugural visit by the USAC Amsoil National Sprint Car Series at the high-banked, quarter-mile. Hines has raced three times on quarter-mile tracks this season with the series, recording an eighth-place finish at Gas City Speedway in Indiana as the best of the lot.

“The short tracks have given us a bit of trouble this year, so we’re hoping to turn that around at Path Valley (Speedway),” stated Hines. “That’s definitely one of the smaller tracks in Pennsylvania, as they are known for the bigger, wide-open type of places, so that should be a cool deal for the fans to see us race on a track like that.”

Last season marked the first-ever appearance by the USAC Amsoil National Sprint Car Series at the sprawling half-mile Port Royal Speedway. Hines finished second in the 30-lap main event, after taking the green flag on the outside of the second row. After getting rained out at the famed Eldora Speedway earlier this season, Port Royal will mark the first half-mile race of the year for the USAC Amsoil National Sprint Car Series.

“Port Royal is a big, fast place, there’s no doubt about it,” Hines said. “We ran up front the whole race there last year, and really want to finish one spot better. We haven’t really raced on any big tracks yet this year due to the weather, so Port Royal will be a good test for sure to see where we are in terms of half-miles.”

Hines wraps up the Eastern Storm Tour by visiting another new track, this time Susquehanna Speedway, an ultra-fast four-tenths-mile. The visit by the USAC Amsoil National Sprint Car Series will mark the first time in over 20 years that non-wing sprint car have visited the Newberrytown, Pa., oval.

“It sounds like that’s a pretty quick track at Susquehanna,” noted the 2002 USAC Amsoil National Sprint Car Series champion. “We always enjoy going to new places, especially where fans don’t get to see our style of racing very often. There is a great group of cars following the series this year and every night is very, very competitive and you really have to be on it to be up front and in contention.”

Hines competed in the second race of the USAC Traxxas Silver Crown Series season last weekend at Gateway Motorsports Park in Illinois, finishing 14th. He is currently seventh in points with the series, just two markers out of the top-five.

Entering the four-race Eastern Storm mini-series this week, Hines is eighth in points with the USAC Amsoil National Sprint Car Series. He has won two times and earned three top-10 finishes in the first seven races of the season.