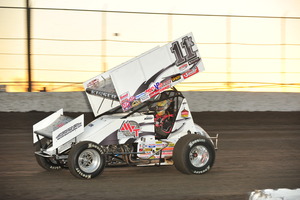 Bloomington, Ind.—March 14, 2013— When asked what tracks on the World of Outlaws STP Sprint Car Series circuit have the most exciting races, one track continually is mentioned by drivers, crew members and fans alike — Thunderbowl Raceway in Tulare, Calif. Kraig Kinser certainly would agree as he has been a part of a number of thrilling races at the high-banked, third-mile bullring in California’s Central Valley. He’ll have a chance to race twice at Thunderbowl Raceway this weekend as the World of Outlaws STP Sprint Car Series West Coast swing continues.

The two-night event at Thunderbowl Raceway in Tulare, Calif., opens for Kinser, who pilots the Casey’s General Store/Mesilla Valley Transportation Maxim, on Friday, March 15 and concludes on Saturday, March 16. Each night will feature a 35-lap, $10,000-to-win main event.

“Tulare is definitely one of the most action-packed tracks on the schedule and also can be very challenging as well,” said Kinser. “Being the first true short track race of the season and the first on the new tires, we’ll try to make the most of the handful of hot laps we’ll get on the first night. We have some good notes from the past there, so that gives us a good starting point.”

Kinser finished 10th last season in the 35-lap main event at the high-banked, third-mile. He opened the night by turning the fifth-fastest lap in time trials of the 25 drivers in attendance, earning one bonus point in the series standings in the process. Kinser lined up fourth in the second eight-lap heat race and finished third, just missing earning a spot in the dash by one position. He would start the main event on the inside of the sixth row and run as high as eighth in the late going before finishing 10th. The second scheduled night of racing was rained out.

“Lapped traffic always comes into play at Tulare, so you have to be on your toes and have a car that is good in tight quarters,” he noted. “Things happen so fast there that you have to always kind of be on the defensive, but also be aggressive and on the offensive as well and make moves when you can.”

Kinser has made 10 main event starts, including preliminary features in his career with the World of Outlaws STP Sprint Car Series at Thunderbowl Raceway, dating back to 2004. The third-generation driver has four career top-10 finishes at the track, with two of those being top-five performances. He finished a career-best fourth at Tulare in October of 2005 and matched that with another fourth-place showing in the spring of 2010. Kinser has earned a top-10 finish in three of his last four starts with the series at the track. He also competed in the Trophy Cup last fall at Tulare, finishing 12th on the final night of the event which drew a stellar field of 85 cars.

Then native of Bloomington, Ind., is currently seventh in the World of Outlaws championship standings just 28 markers out of the top-five on the strength of three top-10 finishes in six races. He finished ninth in his most recent start at Tucson International Raceway in Arizona last weekend.

“We’re still learning things about the new tires and gaining some steam as well go,” said Kinser. “You always want to finish a few spots better and be a little higher in points, but we’re getting closer right now and it’s a long season, so we’ll just keep at it and keep chipping away.”

Keep up with all the action
For the latest news on Kraig Kinser, visit www.kraigkinser.com and follow Kraig on Twitter at twitter.com/kraigkinser11k and receive live updates from the track each and every race night.