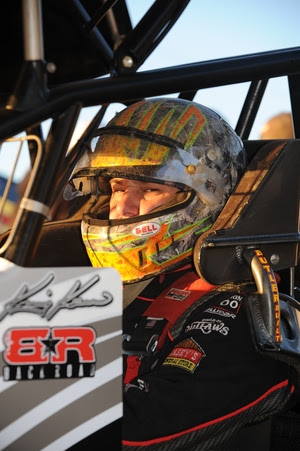 BLOOMINGTON, Ind. — March 9, 2014— With the bad luck that Kraig Kinser ran into on the race track in Las Vegas, it wouldn’t have been surprising if the strong winds that rolled into Tucson International Raceway in Arizona on Saturday night would have interrupted him as they did other drivers, but that thankfully was not the case. The native of Bloomington, Ind., had a consistent night from start to finish, taking the checkered flag in the seventh position in the 25-lap NAPA Auto Parts Wildcat Shootout presented by RideNow Powersports for the World of Outlaws STP Sprint Car Series.

Kinser lined up third at the three-eighths-mile in the Mesilla Valley Transportation/Casey’s General Store/King Racing Products Maxim. He fell back a couple spots on the opening two circuits and was running fifth when the only caution flag of the main event flew on the eighth lap. Donny Schatz would slip by him on the ensuing restart and he would lose one more spot to Joey Saldana in the late going. The seventh-place run was Kinser’s second top-10 finish of the season with the World of Outlaws STP Sprint Car Series.

The third-generation driver timed in 10th-fastest of the 29 drivers that took a qualifying lap at Tucson International Raceway, which put him on the pole of the first heat. Kinser would win that heat race, which was marked the third straight event he has won a heat to put himself in the dash. He lined up eighth in the dash and ended up third, after a five-car accident, caused by a wind gust, marred that six-lapper on the third lap.

Prior to heading to Tucson, Kinser competed in the two-night FVP Outlaw Showdown at the Dirt Track at Las Vegas. In the opener on Wednesday, March 5, Kinser finished 11th. He started eighth and had to make a trip to the work area on the opening lap to swap ignition boxes on the No. 11K. Kinser restarted 18th and was able work his way back to 11th in the 30-lap event which saw the caution flag wave two more times, in addition to a red flag period that stopped the action.

Kinser timed in ninth-quickest of the 37 entries at the half-mile. That put him on the outside of the front row for the first eight-lap heat race, which he won to lock himself in the dash. The 2005 winner of the Knoxville Nationals lined up seventh in the dash and took the checkered flag eighth to earn an outside fourth row starting spot for the 30-lap A-Feature.

In the finale at Las Vegas on Thursday, March 6, Kinser started fourth and moved into third on the opening circuit of the 30-lap main event. He ran in that spot until the eighth go-around, when reigning series champion Daryn Pittman got around him. Kinser would remain fourth until suffering a flat right rear tire on lap-17, forcing him to the work area. He restarted in the 18th position and was able to gain one spot back to cross the finish line in 17th.

Kinser opened the night as the ninth-fastest qualifier for the second straight night and would win the first heat race to punch his ticket to the dash. Kinser started sixth in the dash and came home fourth, which put him on the outside of the second row for the start of the A-Feature.

Kinser, who is currently 10th in the World of Outlaws STP Sprint Car Series championship standings, returns to action on Friday, March 14 and Saturday, March 15, at Thunderbowl Raceway in Tulare, Calif., for a two-night event.