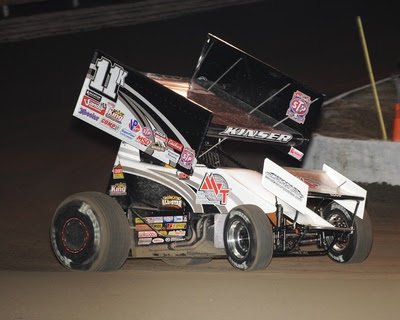 BLOOMINGTON, Ind. — March 3, 2014— Following the season opening events at Volusia Speedway Park in Florida, Kraig Kinser and his fellow World of Outlaws STP Sprint Car Series competitors had two weekends off to get ready for the first West Coast swing of the season. That pair of weekends away from the track will be the last two without any racing, until the completion of the World Finals in November, as the series will compete at least once and in many cases, multiple times, for the next 36 straight weeks. The eight-plus month stretch of races starts this week in Las Vegas and Tucson, Ariz.

The FVP Outlaw Showdown at The Dirt Track at Las Vegas is set for Wednesday, March 5 and Thursday, March 6. The NAPA Auto Parts Wildcat Shootout Presented by RideNow Powersports at Tucson International Raceway in slated for Saturday, March 8.

“We have another solid schedule of races on the West Coast this year,” said Kinser, who pilots the Mesilla Valley Transportation/Casey’s General Store/King Racing Products Maxim. “The competition was very strong in Florida and I look for it to be just as tough out west. There are a lot of good cars in California and up in the Northwest as well that will be racing with us. It will be nice to have some warm weather also, with the winter we’ve had.”

Kinser was victorious at Las Vegas in 2005 on the opening night of the spring event. He followed that up with a runner-up finish. The third-generation driver has made seven career top-10 finishes in 14 World of Outlaws STP Sprint Car Series main events starts at the half-mile, including preliminary features. Last year at Las Vegas, Kinser finished 18th on the opening night and was 19th in the finale.

“Over the years we’ve run fairly well at Las Vegas,” he noted. “I was fortunate enough to win there once and it would be great to add another one. Last year we didn’t have the best of luck out there, but we seemed to get better on the bigger tracks as the year went on, so we’ll try to apply some of what worked in the latter part of last season this week. Having two nights at the track, you can try a few things on the first night to find a little something extra for the second night.”

In his first World of Outlaws STP Sprint Car Series start at Tucson International Raceway in 2013, Kinser finished ninth, after starting 14th. He opened the night as the 14th-quickest driver in time trials of the 30 entrants. Kinser finished sixth in the second heat race to earn a spot in the 30-lap main event. The native of Bloomington, Ind., made his debut at the three-eighths-mile in 2011 during the Western World Championship in a 360-sprint car event.

“Tucson (International Raceway) is a pretty racy place,” said Kinser. “I’ve only run there a few times and only once with the World of Outlaws, so it’s a place we treat like a new track as we are still learning some of the nuances of the surface. We don’t race much in that part of the country anymore, so it’s always good to get down that way, as there are a lot of longtime sprint car fans in Arizona.”

Kinser enters this week’s trio of events just 12 points out of the top-10 in the World of Outlaws STP Sprint Car Series championship standings. He finished ninth in the finale of the DIRTcar Nationals Presented by Summit Racing Equipment at Volusia Speedway Park in Florida last month.