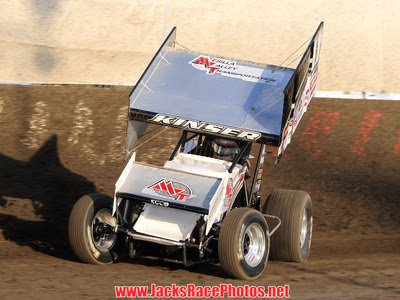 BLOOMINGTON, Ind. — March 20, 2014— The inaugural World of Outlaws STP Sprint Car Series event last year at Stockton 99 Dirt Track was a rousing success. A sold-out crowd saw the best sprint car drivers in the world battle it out for 30 laps, much to the delight of the standing-room only crowd. Unfortunately for Kraig Kinser, mechanical problems prevented him from completing a single lap in the feature that night. The third-generation driver will return to the three-eighths-mile this weekend and looks to rebound from the back luck that plagued him last year at Stockton, as he pilots the Mesilla Valley Transportation/Casey’s General Store/King Racing Products Maxim.

The FVP Western Spring Shootout is set for Saturday, March 22 at Stockton 99 Dirt Track. A full night of racing is on-tap, with a 30-lap, $10,000-to-win A-Feature capping the festivities. The event will mark the third round of the current nine-race “Spring Break Tour” in the state of California for the World of Outlaws STP Sprint Car Series.

“The crowd at Stockton (99 Dirt Track) last year was simply amazing,” said Kinser. “To see that many people come out, shows how much the community and local area support the track, and was pretty neat. Everyone did a great job making sure everything was ready to go. With a year under their belts, we should be in store for another great show this year. They are having a race the night before we race, so that will help run the surface in a bit after the off-season.”

Last year at Stockton, Kinser opened the event as the 21st-fastest of the 44 entries that took to the three-eighths-mile for time trials. The native of Bloomington, Ind., lined up sixth in the first eight-lap heat race and finished in that same spot, coming up just one position short of transferring to the main event. He was in a transfer spot in the B-main coming to the white flag, when he ran out of fuel, which forced him to take a provisional to the start the A-Feature. Mechanical problems in the main event relegated him to a 26th-place finish.

“For us, since we didn’t get all that many laps there, we are still kind of treating it like a place we are going to for the first time,” he noted. “We had an okay car in the heat race and just missed transferring and then were pretty decent in the “B” and ran out of fuel. Things kind of spiraled down from there, so we are definitely looking to redeem ourselves this time around.”

In his most recent start at Thunderbowl Raceway in Tulare, Calif., last weekend, Kinser finished eighth. He has a trio of top-10 finishes this season, which has seen the World of Outlaws STP Sprint Car Series compete at four different tracks thus far.

Kinser is currently ninth in points with the World of Outlaws Sprint Car Series. The 2005 winner of the Knoxville Nationals has qualified among the top-10 in five of the first eight races this season. He has three heat race wins and has raced his way into the dash on four occasions.

The FVP Western Spring Shootout opened on Thursday afternoon with Kinser’s father and team owner, Steve, receiving a “Key to the City” from the Mayor of Stockton, Anthony Silva.