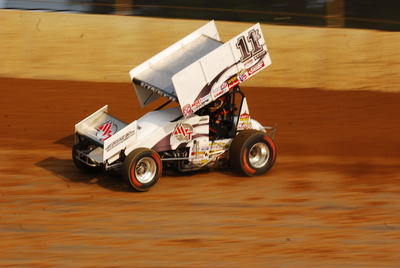 Bloomington, Ind.— July 10, 2013— It’s called the “Month of Money” for good reason. A majority of the highest-paying and most prestigious events of the year for the World of Outlaws STP Sprint Car Series are contested during a four-week stretch that begins this week with the Brad Doty Classic and Kings Royal and culminates with sprint car racing’s biggest event, the Knoxville Nationals, Aug. 7–10. Along the way, stalwarts such as the Don Martin Memorial Silver Cup, the Summer Nationals and the Ironman 55 are interspersed.

Kraig Kinser has visited Victory Lane during “The Month of Money” during his career and is set to contest the 2013 edition of the richest four weeks in sprint car racing again, aboard the Casey’s General Store/Mesilla Valley Transportation Maxim. “The Month of Money” opens with the 25th Annual Ohio Logistics Brad Doty Classic Presented by Racing Optics at Limaland Motorsports Park in Lima, Ohio, on Thursday, July 11. The event was originally scheduled for Wednesday, July 10, but rain pushed it back a day.

The 30th Kings Royal weekend at the famed Eldora Speedway in Rossburg, Ohio, takes the green flag on Friday, July 12, with the running of the Knight Before the Kings Royal. The 40-lap, $50,000-to-win Kings Royal is set for Saturday, July 13.

“This is definitely the time of the year everyone waits for,” said Kinser. “You want to be at your best and make sure your equipment is ready night in and night out. We had an extra day this week to prepare, which was good, especially after the long drive back from Dodge City (Raceway Park in Kansas). As a sprint car driver, this is what you prepare for the most, though you try to treat every race like the first 40-some we’ve already run this year.”

Kinser has raced in the Brad Doty Classic four times in his career with the World of Outlaws STP Sprint Car Series. He finished a career-best fourth in both 2009 and 2010. He made his first start in the event in 2008 and finished 12th last season at the quarter-mile bullring that is owned and operated by the University of Northwestern Ohio.

“Limaland (Motorsports Park) is a very racy track,” he noted. “I’ve had some pretty good runs there and we’ve been good on the smaller tracks this year, so I’m certainly looking forward to it. They’ve had a lot of rain there this week, so we’ll have to gauge the surface when we get there and go from there. Usually, we have a pretty good set-up for places like that.”

Last season in the Kings Royal, Kinser charged from the 23rd starting position to finish fifth in the 40-lap main event, after racing his way into the main event through the B-main. He ran ninth in the Knight Before the Kings Royal and also was ninth in the opener of the spring event at the track. The native of Bloomington, Ind., has made a pair of appearances at Eldora this season, with an 18th-place finish being the best of the lot.

In his career at Eldora with the World of Outlaws STP Sprint Car Series, Kinser has made a total of 40 main event starts, including preliminary features. He has scored 12 top-10 finishes, with four of those being top-five performances as he chases his first win at the legendary track. He finished a career-best third in the spring of 2005 at the half-mile.

“We struggled earlier this year at Eldora (Speedway), but have learned quite a bit about the new tires on bigger tracks since then,” Kinser shared. “Qualifying in the right spot is very, very important during the Kings Royal. We got a little behind in that regard last year and had to come through the B-main and had a fantastic car come feature time. The goal is always to get into the dash, so you can start more toward the front.”

Kinser heads into the “Month of Money” 11th in the World of Outlaws STP Sprint Car Series championship standings, just 25 markers out of the top-10. The 2005 winner of the Knoxville Nationals has one win, along with 20 top-10 finishes, of which seven are top-five showings.