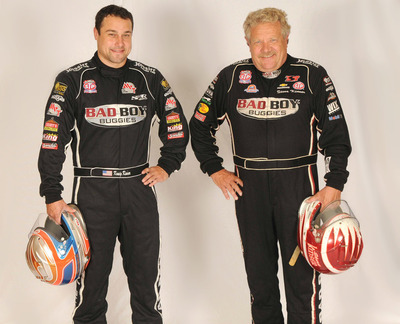 BLOOMINGTON, Ind.—August 5, 2013— Once a driver experiences the thrill of winning sprint car racing’s biggest event — the Knoxville Nationals — it becomes a high priority to win it again. That competitive nature burns inside Kraig Kinser, who claimed the 2005 Knoxville Nationals, in just his third A-Feature start in the sport’s most prestigious event, joining his father Steve, a 12-time winner of the Nationals, as the only father/son duo in history to share the honor. The younger Kinser will join his father this year, sporting the Bad Boy Buggies colors for the four-day event. The paint scheme on Kinser’s car will be unveiled during a press conference at Noon Central on Tuesday, Aug. 6, behind the main grandstand at Knoxville Raceway.
The 53rd Annual FVP Knoxville Nationals for the World of Outlaws STP Sprint Car Series is set for Aug. 7–10 at the famed Knoxville Raceway on the grounds of the Marion County Fairgrounds in Knoxville, Iowa. Kinser will take to the track in his Bad Boy Buggies Maxim on Wednesday, Aug. 7, during the first of two preliminary nights. Racing will also continue on Friday, Aug. 9, with the $150,000-to-win, 50-lap main event set for Saturday, Aug. 10.

“The Knoxville Nationals is what everyone works the whole year for,” said Kinser. “Having Bad Boy Buggies on the car for the event this year is great. They are involved as my dad’s sponsor at Tony Stewart Racing and for them to be on my car as well this week is definitely an honor. Knoxville will always be a special place to me and having been fortunate enough to win there is priceless. Being able to become the first father and son to win definitely meant a lot to my dad and me and our entire family for that matter.”

Last year, Kinser finished fourth in the Knoxville Nationals, which marked his second-career top-five finish in the event and his third top-10 showing. He opened the 2012 Knoxville Nationals with a third-place performance on the second qualifying night, which earned him enough event points to directly lock him into the A-Feature on the final night. The third-generation driver lined up ninth for the main event and steadily worked his way forward over the course of the 50-lap contest, which utilized a break in the middle for refueling and tire changes.

“We had a very consistent Nationals last year,” he noted. “We had a very strong qualifying night and put ourselves in a good position for Saturday night and that’s important with the format of the event. On Saturday last year, the car really was strong in the second half of the race and we were able to continue to move forward. Getting locked into the main event if the first goal and once you are able to do that, then you can focus on a good race set-up for the 50 laps.”

In his career with the World of Outlaws STP Sprint Car Series at Knoxville Raceway, Kinser has made a total of 30 main event starts, including preliminary features. He has a pair of wins, both coming in 2005, to go along with 11 top-10 finishes, of which six are top-five showings. Kinser made his debut at the half-mile with the World of Outlaws in 2001 and raced in his first Knoxville Nationals that same year. He qualified for his first main event at the Nationals in 2003.

“I’ve had a good amount of success at Knoxville over the years, both in the Nationals and regular races,” Kinser stated. “It’s always a challenging track and now with the race being 50 laps, you really have to pace yourself and make sure to take care of your car, so that you give yourself a chance at the end. That all starts on your preliminary night and timing in well and earning as many points as you can each time you hit the track.”

Kinser has made two starts this season at the famed half-mile, finishing 13th in May and 21st in June. In his first start of the year at Knoxville, Kinser timed in 26th of the 52 drivers that were in attendance. He charged from sixth to fourth in the first heat race to earn a spot in the 25-lap main event. Kinser was 22nd in qualifying in June at Knoxville, with a field of 42 assembled. He finished fifth in the second heat race to punch his ticket to the A-Feature.

“We haven’t had the best of results in the two races we’ve run at Knoxville this year, but we’ve learned a lot in those races,” he explained. “With the caliber and number of cars that will be there this week, you have to be on your ‘A-Game’ and then some. Everyone will have their best engine in and their freshest equipment. Knoxville is a challenge unlike any other and hopefully we’ve made the right preparations.”

Before making the trek north to Knoxville, Kinser raced in the fifth edition of the Ironman 55 at Federated Auto Parts Raceway at I-55 in Pevely, Mo., on Saturday, Aug. 3. He finished 12th in the caution-plagued 55-lap featured at the high-banked bullring just outside of St. Louis. Kinser timed in13th-quickest of the 34 entries, which put him on the pole of the first heat. He finished second in that 10-lap contest to earn a spot in the dash, where he came home seventh. The opener of the Ironman 55 weekend on Friday, Aug. 2 was rained out and will not be made up.

Kinser enters the 53rd Annual FVP Knoxville Nationals in the 13th spot in the World of Outlaws STP Sprint Car Series championship standings. He has one victory this season to go along with 23 top-10 finishes, of which eight are top-five performances.