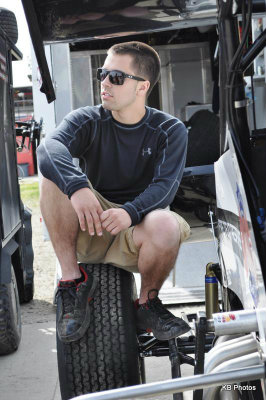 WATERTOWN, Conn.—May 23, 2013— Memorial Day weekend has long been known for racing. Two states take center stage during this timeframe — Indiana and North Carolina. David Gravel will have a chance to race in both racing-rich states over the course of a four-day stretch as the World of Outlaws STP Sprint Car Series visits The Dirt Track at Charlotte in Concord, N.C., before heading to Lawrenceburg Speedway in Indiana for an event on Memorial Day aboard the JRC Transportation/Firetext Response/Musco Fuels/Wright Process Systems machine under the Bill Rose Racing banner.

The holiday weekend will open for Gravel in the Circle K Outlaw Show at The Dirt Track at Charlotte on Friday, May 24. He’ll take to the high-banked three-eighths-mile at Lawrenceburg Speedway on Monday, May 27.

Last season at The Dirt Track at Charlotte, Gravel was fastest in time trials for the finale of the World Finals in the fall, with a 50-car field in attendance. In the 30-lap main event he finished 10th, which marked the best finish of his career at the state-of-the-art four-tenths-mile. Gravel just missed qualifying for the main event on the first night of features during last year’s World Finals. He made his debut at Charlotte in 2009 during the Circle K Outlaw Showdown and has competed in the World Finals in each of the last three years.

“We were good on the last night of the World Finals last year and in the second round of qualifying, so hopefully we repeat that again,” said Gravel. “To set fast time for the second night of that event with all the cars that were there was a pretty good accomplishment. We’ve been a little off in time trials lately, so we’ll definitely be looking to pick it up come Friday and put ourselves in a good position to start the night.”

Gravel recorded his best-career finish at Lawrenceburg Speedway last season, finishing fifth, after charging from the 10th starting spot. The East Coast racer qualified 16th with a field of 32 cars checked in, which put him on the pole for the fourth 10-lap heat race. He would win that heat to earn a spot in the dash, where he came home 10th. Gravel raced for the first time at Lawrenceburg Speedway in 2009 during the Hoosier Fall Classic with the UNOH All Star Circuit of Champions, finishing 12th in that event.

“Lawrenceburg is a very racy track,” he noted. “There were a lot of good cars there last year, so to finish fifth was big for us. That was one of those nights where we qualified in a spot that put us on the front row of a heat and were able to win that to get in the dash. Right now, getting in the dash is so important with the World of Outlaws and we have to start getting back in the dash to give ourselves a shot in the main event.”

Gravel recently wrapped up the first East Coast Swing of the season for the World of Outlaws STP Sprint Car Series with a 16th-place finish at New Egypt Speedway in New Jersey on May 21. After starting 23rd, he worked his way forward to gain seven positions in the 30-lap event which went green-to-checkers without a single caution. Prior to that he finished 19th at Orange County Fair Speedway in New York, 17th at Williams Grove Speedway in Pennsylvania and was also 17th at Lincoln (Pa.) Speedway.

“The East Coast trip didn’t quite go how we were hoping, but that’s racing and we just have to put it behind us,” Gravel shared. “One of the nice things about racing with the Outlaws is that you always have another race right around the corner, so you can’t really dwell on your last race too much. We learned some stuff over the last week and hopefully that will help us next time we head out east. We’re focused on Charlotte and Lawrenceburg and feel like we have a good set-up for both of those places.”

Entering this week’s pair of races, Gravel is seventh in the World of Outlaws STP Sprint Car Series championship standings. He has picked up 10 top-10 finishes, with four of those being top-five showings, including a season-best second-place performance at Tri-State Speedway in Indiana, on April 20.