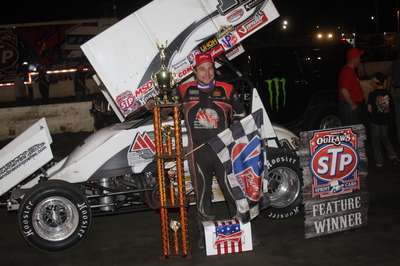 BLOOMINGTON, Ind.—May 23, 2013— In terms of facilities and venues on the World of Outlaws STP Sprint Car Series trail, a pair continually pops up when talking about state-of-the-art tracks. One of those is The Dirt Track at Charlotte in Concord, N.C., and the other is Lawrenceburg Speedway in Indiana. Kraig Kinser knows both tracks very well, as he’s called the Charlotte area home for a few years, while Lawrenceburg Speedway in his home state of Indiana and a track that he raced at early in his career. This Memorial Day weekend, the third-generation will take to the track at both venues with the World of Outlaws STP Sprint Car Series in the No. 11K Casey’s General Store/Mesilla Valley Transportation Maxim.

The Circle K NOS Energy Outlaw Showdown at The Dirt Track at Charlotte is set for Friday, May 24. A trip back to the Midwest will find the series at Lawrenceburg Speedway on Memorial Day itself, Monday, May 27.

Kinser heads into the pair of events fresh off his first World of Outlaws STP Sprint Car Series win of the season at Orange County Fair Speedway in New York, earlier this week. He recorded three straight top-10 finishes to wrap up the first East Coast swing of the season, including a 10th-place showing on Tuesday, May 21, in his debut at New Egypt Speedway in New Jersey.

“It was definitely great to get our first win of the season and hopefully we can continue to run like we have the last week,” Kinser said. “Going to a couple of tracks this weekend that I have done well at in the past certainly helps in the confidence department. The competition is so tough out here right now that you have to put a whole night together and have everything go your way to be in contention.”

Kinser made three starts at Charlotte last year and finished fourth or better in each of those three races. He was fourth in the spring race and followed that up with a third-place showing in the opener of the season-ending World Finals and came home fourth in the finale of that blockbuster event. Kinser opened the spring race at Charlotte by turning the eighth-fastest lap in time trials, which put him on the outside of the front row for the second eight-lap heat race which he won to earn a spot in the dash, which he won to earn the pole for the 30-lap main event. He has finished ninth or better in each of his last four starts at the track.

“We learned a lot at Charlotte last year and should be able to use some of that this week,” he noted. “The tires are obviously different so we’ll make the most of hot laps to get the feel for the track with those and look to go with a similar set-up to what we have in the past there. When the track is right, there is plenty of racing room there.”

In his career at The Dirt Track at Charlotte, Kinser has made a total of 18 starts, picking up seven top-10 finishes along the way, with four of those being top-five performances. He finished a career-best second in the finale of the 2008 World Finals. Kinser made his debut at the four-tenths-mile with the World of Outlaws STP Sprint Car Series in 2002 and has competed with the series in eight different seasons, including six consecutive.

Kinser finished second last season at Lawrenceburg, following a thrilling duel with Chad Kemenah that saw the pair officially trade the lead twice, but unofficially quite a few times, as they diced back-and-forth lap-after-lap. Kinser began the night at the three-eighths-mile as the 10th-quickest driver in qualifying, which put him on the front row of the second heat race. He finished second in that six-lap contest to earn a spot in the dash, where he came home fourth.

“That was a great race we had with Chad (Kemenah) last year,” Kinser stated. “You never want to finish second, but in a race that was as thrilling as that one and to have a guy who is a good friend of mine like Chad win it, that helps you deal with finishing second. Hopefully we can have another solid run at Lawrenceburg and put on a good show for the fans.”

Kinser has won twice at Lawrenceburg in his career. First, with the World of Outlaws in 2005, and then with the UNOH All Star Circuit of Champion in the Fall Classic in 2007. Both of those victories came when the surface was a quarter-mile. In his career with the World of Outlaws STP Sprint Car Series at Lawrenceburg Speedway, Kinser has made five starts, picking up three top-five finishes.

Entering the pair of events this weekend, Kinser sits 11th in points with the World of Outlaws STP Sprint Car Series, on the strength of one win, 11 top-10 finishes and four top-five performances.

Kraig Kinser celebrates his first win of the season at Orange County
Fair Speedway on May 20. (Photo Courtesy of Jeff Martz)