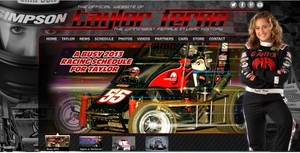 Shelby Township, Mich.—March 15, 2013 — In conjunction with making her ARCA debut last week, Taylor Ferns introduced a redesigned website that can be found at www.TaylorFerns.com. News, photos, a detailed biography section, in-depth descriptions of the three different types of race cars she’ll drive in 2013, video clips, and an online store that features a brand new t-shirt and hooded sweatshirt for this season are all part of the new website. Links to Taylor on Facebook, Twitter, Instagram and Pinterest are also part of the website, which was designed by Elliottbrand Design & Web Services.

A complete 2013 schedule for Ferns, who is the winningest female driver in USAC history, can be found on the redesigned website, including the seven ARCA Racing Series presented by Menards events she will compete in, as well as her USAC National Midget Series schedule, the USAC Traxxas Silver Crown Series slate she has on her docket and additional midget races she will compete in with the POWRi Lucas Oil National Midget Series and Badger Midget Auto Racing Association.

Following a ninth-place finish in her first-ever start with the ARCA Racing Series presented by Menards on March 9 at Mobile International Speedway in Alabama, which saw her qualify fifth, Ferns is scheduled to return to action on Saturday, March 23 with the Lucas Oil POWRi National Midget Series at Belle-Clair Speedway in Illinois.

For all the lastest news and information on Taylor Ferns and to see when and where she’ll be racing next, visit www.TaylorFerns.com.