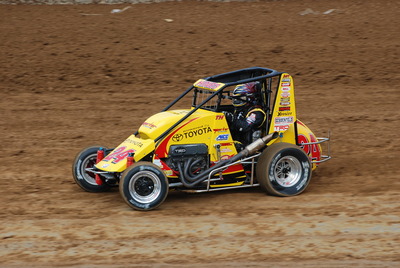 NEW CASTLE, Ind. — Oct. 17, 2013— Just one more outdoor open wheel event remains in the state of Indiana in 2013, and that is the Kokomo Klash this week at Kokomo Speedway. Tracy Hines has included the event on his calendar for the last several years and has had quite a bit of success at the quarter-mile in the late-season special, which he has won the midget portion of, in each of the last two years.

“It’s always a long off-season for the fans in Indiana, so it’s great to have a late season event to get them a couple more races before the cooler weather begins to set in,” said Hines. “Kokomo (Speedway) has really made the Klash into a ‘Must See’ event over the last handful of years. It’s certainly is a good way to wrap up the Midwest part of our season by getting to run both the sprint car and midget.”

Last season in the Kokomo Klash, Hines started on the pole for the 25-lap main event for the midgets and ran second on the opening circuit, before taking the lead from Thomas Meseraull on the second lap. The home state driver quickly opened a lead and paced the final 24 circuits in the race, which was slowed by a couple of cautions. He was victorious over fellow veterans Shane Hollingsworth and Bobby East. Hines opened the night by winning the first heat race.

“We’ve been pretty good in the midget at Kokomo the last few years,” he shared. “We had some bad luck during Indiana Midget Week this year, so we are looking to make up for that. There is plenty of room to race a midget at Kokomo and you carry quite a bit of speed and momentum when you run around top there.”

The native of New Castle, Ind., started near the front in the sprint car portion of the Kokomo Klash last year. He was running among the lead pack when the first stoppage of the night occurred on the second lap for a flip. He restarted third, and fell back to fourth, before working his way into third following a caution just past the halfway point of the race. Hines would take the checkered flag in third to earn the final spot on the podium, which was one of seven top-five finishes he has at the track in a sprint car in 2012.

“It’s been a while since we won a sprint car race, and we’ll be giving it everything we got,” he noted. “The folks at Kokomo always give us a good surface to race on, so you know you’ll have multiple grooves and can move around the track to make things happen. It’s definitely a racy little place.”

This season at Kokomo Speedway, the veteran driver has made five starts, with four of those coming with the Amsoil USAC National Sprint Car Series and one with the Honda USAC National Midget Series during Indiana Midget Week. He finished a season-best sixth at the quarter-mile on the second night of the Sprint Car Smackdown in August and was ninth in the finale of that three-night event.

Hines has won a total of five races this year in three difference types of machines. He has two wins on the dirt with the Amsoil USAC National Sprint Car Series, as well as a pair of triumphs on the pavement with the Honda USAC National Midget Series. Hines was also victorious with the Traxxas USAC Silver Crown Series at the famed Belleville High Banks in Kansas.

“You always want to wrap up the year on a strong note and doing well this weekend can give us some momentum as we head west,” said Hines. “Kokomo will be the last short track of the year and we’ve gotten better as the year has gone on at the smaller tracks. Like everywhere else, it takes a combination of a fast car and a little luck to be up front.”