Three Races in Three States for Tracy Hines this Weekend 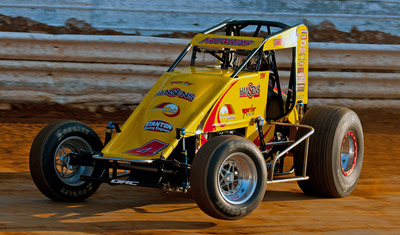 NEW CASTLE, Ind.— June 20, 2013— It takes a great amount of versatility to be a champion, especially when competing in the three USAC national divisions. Tracy Hines has shown this type of versatility time and time again, as is evident by his two-career USAC titles in two different divisions. This weekend that trait will come in handy as he competes on a pair of the largest tracks on the USAC Amsoil National Sprint Car Series schedule as well as one of the smallest on the Honda USAC National Midget Series docket.

The weekend will open for Hines on Friday, June 21 with the USAC Amsoil National Sprint Car Series at the Terre Haute Action Track in his home state of Indiana, as he pilots the Hansen’s Welding Inc. DRC for the running of the Tony Hulman Classic, which was postponed by rain last month. He’ll then head to I-96 Speedway in Lake Odessa, Mich., on Saturday, June 22 for another event with the USAC Amsoil National Sprint Car Series. The weekend will conclude for the veteran driver on Sunday, June 23 with Honda USAC National Midget Series Dirt Championship at Angell Park Speedway in Sun Prairie, Wisc., aboard the Parker Machinery/Powered by Toyota Spike.

“After having a couple good runs on the bigger tracks in Pennsylvania, earlier this month, we’re looking forward to going to Terre Haute and I-96 (Speedway) and applying what worked out east,” said Hines. “Having some bad luck to end Indiana Midget Week, it will be good to get right back in the midget and hopefully make up for that with a strong run at Sun Prairie (Angell Park Speedway).”

Last season with the USAC Amsoil National Sprint Car Series, Hines finished 12th in the Tony Hulman Classic at Terre Haute. He made three starts at the legendary half-mile in 2012, earning a pair of top-five finishes. Hines came home third at Terre Haute during Indiana Sprint Week and was fourth in the fall. He has three career USAC Amsoil National Sprint Car series wins at Terre Haute, with the first coming in 1999, followed by a victory in the Tony Hulman Classic in 2001 and his most recent triumph with the series at the half-mile came in 2003.

“The Tony Hulman Classic has so much history and prestige,” Hines stated. “I was fortunate enough to win it once and it would be great to win it again. It’s been a while since I’ve been to the winner’s circle at Terre Haute. We know we have the package to run up front there and be in contention. We just have to do our jobs and let the rest take care of itself.”

Hines raced once last year in the state of Michigan with the USAC Amsoil National Sprint Car Series at Hartford Motor Speedway, which is a half-mile like I-96 Speedway. At Hartford, he finished sixth in the 30-lap main event. Hines has made one start in a sprint car on a half-mile this season, finishing sixth at Port Royal Speedway and setting fast time that night. The last time that the USAC Amsoil National Sprint Car Series visited I-96 Speedway was in 1996.

“We’re were supposed to race at I-96 last year, but Mother Nature interrupted that one, so it’s good that the track and USAC were able to get us back up there this year,” he noted. “Prior to last year, it had been a while since we had raced on the dirt in Michigan. I-96 is a big place and that’s a track where starting position will be very important. That all starts with time trials and we are going to do our best to time in well and put ourselves in a good spot for the rest of the night.”

“Angell Park is a track that’s been very good to me over the years,” said Hines. “Last year we came close to winning a couple of races there. We’ve been working on a few things this week that we ran across during Midget Week, so we should be good right out of the trailer. With it being a Badger (Midget Auto Racing Association) and POWRi race also, there will be a strong field of cars up there.”

Hines enters the pair of USAC Amsoil National Sprint Car Series events seventh in points. He has two wins on the season, along with five top-10 finishes. With the USAC National Midget Series Dirt Championship, he is ninth in the standings after the opening five races of the season last week during Indiana Midget Week.