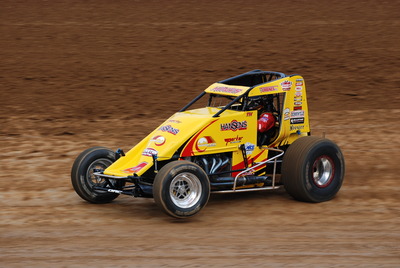 NEW CASTLE, Ind.— July 7, 2013— Over the last two weeks, Tracy Hines has competed on both dirt and asphalt as well as in each of the three divisions that comprise the USAC national schedule. One common theme has been top-10 finishes in each and every one of those races. With a trio of top-10 performances on three consecutive days over the Fourth of July weekend, the veteran driver has now recorded seven straight top-10 finishes across the three USAC national series. Hines has placed among the top-10 in 12 of his last 14 starts over the last month of racing.

The native of New Castle, Ind., wrapped up the three-race stretch with a fourth-place showing in the inaugural Belleville Bash at the fifth-mile Belle-Claire (Ill.) Speedway, which was tri-sanctioned by the Honda USAC National Midget Series, POWRi Lucas Oil National Midget Series and Badger Midget Auto Racing Association on Saturday, July 6. Hines lined up ninth for the 30-lap event in the Parker Machinery/Powered by Toyota Spike and steadily worked his way forward.

The veteran driver was all the way up to third and battling eventual winner Bryan Clauson for second in the late going. Hines was running third on the final lap, with Brad Kuhn edging him out at the line for the final spot on the podium. Hines opened the night by winning the first 10-lap heat race, which put him in the first of four qualifying races. In the qualifying race, he ran third, which solidly put him in the main event.

“We worked our way forward in the feature and just ran out of laps,” Hines said. “It’s tough to lose a podium spot on the last lap like that, but with the field of cars they had, to come home fourth was a decent finish. Belle-Claire (Speedway) is such a unique track and we really had to do things a lot different than we are normally used to on the bigger tracks. All in all, for the first time they held the event it seemed to go pretty well.”

In the opener at Belle-Claire on Friday, July 5, Hines finished seventh. A season-high field of 52 cars was assembled at the bullring for the full night of racing, which was capped by a 30-lap main event. Hines turned the eighth-quickest lap in time trials and followed that up with a fourth-place finish in the fourth heat race to punch his ticket into the main event. He started from the inside of the second row for the feature and ran in the top-five for the majority of the race before finishing seventh.

“Starting in the first couple of rows, you never want to slip back, and unfortunately that’s what we did,” he shared. “We definitely learned a few things in that race, which ended up helping us on Saturday. Time trials were very important with the huge field of cars and we timed in a good spot, which set us up for the rest of the night.”

Hines spent Independence Day, July 4, at Lincoln Park Speedway in Putnamville, Ind., competing with the USAC Amsoil National Sprint Car Series. He finished eighth in the 30-lapper at the high-banked, 5/16th-mile bullring. Hines timed in fourth-fastest of the 41 drivers in attendance. He came home fourth in the first heat race to earn a spot in the main event, where he took to the grid on the outside of the front row.

“With Sprint Week coming up, we certainly wanted to have a good run at Putnamville (Lincoln Park Speedway),” he noted. “We’ll be back there next week and feel like we now have a pretty good baseline in the sprint car. Just like it is about every night anymore, time trials will be a key during Sprint Week when we go back to Lincoln Park (Speedway) and there will be another strong field on-hand.”

Following the two nights of racing at Belle-Claire Speedway, Hines is sixth in points with the Honda USAC National Midget Dirt Championship, just 16 markers out of the top-five. The next race for the series is July 30 at Solomon Valley Raceway in Kansas. With the USAC Amsoil National Sprint Car Series, the 2002 series champion is seventh in the standings. He returns to action this week with the running of Indiana Sprint Week, which opens on July 12 at Gas City I-69 Speedway.

“We have a few more days to get ready for Sprint Week, so we’ll be busy in the shop, that’s for sure,” Hines said. “When you race seven times in nine days you have to be on your game and make sure you have all the little things ready and are really paying attention to detail. This is the stretch of races when preparation in the shop really shows and we’ve been working night and day to make sure we are ready.”