Tracy Hines Geared Up for the Kokomo Grand Prix this Weekend 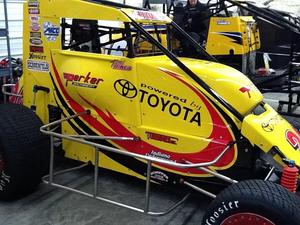 New Castle, Ind.—April 11, 2013— There are some tracks and combinations that just agree with a driver and they seem to run up front and be in contention every time they visit that particular venue. For Tracy Hines one of those pairings is Kokomo Speedway and a midget, where he has had more than his fair share of success in his career, especially over the last couple of seasons. He’ll have two more opportunities this weekend to race at the Indiana oval aboard the Parker Machinery/Powered By Toyota Spike.

The inaugural Kokomo Grand Prix for the USAC National Midget Series is set for Saturday, April 13 and Sunday, April 14. The main event on the opening night will pay $4,000-to-win, while the victor on Saturday night will pocket $6,000 and is being co-sanctioned by the POWRi Lucas Oil National Midget Series.
Hines won at Kokomo Speedway in a midget last fall during the Kokomo Klash, which marked the second straight year he has won that late season event. He made one start last year with the USAC National Midget Series at the always racy bullring, coming home third during Indiana Midget Week. The veteran driver has finished on the podium in each of his last four midget starts at Kokomo dating back to 2011.

“We always seem to run pretty good at Kokomo in a midget,” said Hines. “There is going to be a very strong field on-hand, so you’ll definitely have to be on your game each time you hit the track. It’s been since the Chili Bowl since I’ve run the No. 24 midget on the dirt, so getting a few good, clean hot laps will important to start the night.”

The native of New Castle, Ind., opened the USAC National Midget Series Pavement Championship at New Smyrna Speedway in Florida in February with a third-place finish in the opener of that two-night event. He qualified ninth and finished fourth in his heat race, which lined him up seventh for the main event. In the finale at New Smyrna, he finished eighth, after opening the night by timing in fifth and finishing fifth in a heat race. Last month, Hines ran a pair of indoor midget events with the Badger Midget Auto Racing Association at Cedar Lake Arena in Wisconsin, finishing second and seventh in a pair of races.

“It was great to have the two midget races in Florida and then the indoor race in Wisconsin last month as well,” he shared. “In the past we’d race the Chili Bowl and then not be a midget until the spring, so to have a few races this year that we normally didn’t have was a great way to stay sharp and on top of things.”

Entering the Kokomo Grand Prix, Hines is seventh in points in the USAC National Midget Series Pavement Championship standings. Separate titles will be awarded in 2013 for the pavement and dirt champions, with this weekend’s pair of events serving as the opener for the dirt portion. Last season Hines finished second in overall points with the USAC National Midget Series, winning a total of four races, with two coming on the dirt and two on pavement.

“We had pretty good year all around in the midget last year and certainly want to build on that,” said Hines. “With separate championships this year for the dirt and pavement races it makes you have to be even better, because you’ll have a few less races to make up for a bad race when you have one. Starting off on a good note is definitely important and to do well in a big event like the two-nighter at Kokomo and would be a great way to kick-off the dirt portion of the schedule.”

Hines raced most recently last weekend in his home state of Indiana at Lawrenceburg Speedway with the USAC Amsoil National Sprint Car Series, finishing 12th. He is currently fifth in points with the series as he will contest the entire schedule along with the full slate for the USAC Traxxas Silver Crown Series and USAC National Midget Series.