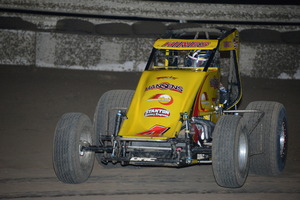 NEW CASTLE, Ind.— May 15, 2013— Two different race cars and two very different race tracks will greet Tracy Hines in his home state of Indiana this weekend. But, that’s just par for the course for the veteran driver who is used to competing in all three USAC National series as he will race in both a sprint car and a Silver Crown machine.

Hines will hit the track at Bloomington Speedway on Friday, May 17 with the USAC Amsoil National Sprint Car Series aboard his Hansen’s Welding Inc. DRC for the running of the Larry Rice Classic. That event will feature time trials and heats races, followed by a main event. On Saturday, May 18, the veteran driver will take part in the 100-lap Hall of Fame Classic for the USAC Traxxas Silver Crown Series at Lucas Oil Raceway at Indianapolis in Clermont, Ind., behind the wheel of the Lightfoot Racing Beast.

“The month of May is a great time in the state of Indiana for all of open wheel racing and we are fortunate again this year to have a handful of races at some tracks that I’ve had success at over the years,” Hines said. “Having a couple of races this weekend and then three races next week provides a great opportunity to stay in the seat and get into a rhythm.”

“Bloomington is always a pretty racy track,” he shared. “We learned a few things last weekend at Haubstadt (Tri-State Speedway) that should help our short track program this weekend. The first order of business each night is to get qualified well and transfer from the heat into the main event. At Haubstadt, we had an uphill battle all night after time trials and we are going to try to make sure we don’t put ourselves in that position again.”

Hines finished sixth last year in the inaugural Hall of Fame Classic for the USAC Traxxas Silver Crown Series on the pavement at 0.686-mile Lucas Oil Raceway at Indianapolis. He started 11th in the 100-lapper and steadily worked his way forward. Hines made two starts in a Silver Crown car at the track last season. He was victorious with the USAC Traxxas Silver Crown Series at Lucas Oil Raceway at Indianapolis in 2010. He has finished in the top-10 in four of his last five Silver Crown starts at the historic 0.686-mile track.

In a midget last season at the Lucas Oil Raceway at Indianapolis, Hines went undefeated, winning both of his starts. He claimed his first Lucas Oil Raceway at Indianapolis victory back in 1997 in a midget. Hines won at least one race at the track every year from 1997-2001. He has a total of 13 career wins at the venue across the three USAC National Series.

“Raceway Park is a place I’ve been able to win quite a few races at over the years and always seem to be in a good position to be in contention there,” he noted. “With it being the first Silver Crown race of the year, we’ll try to make the most of the couple of practice sessions we have, so we can feel everything out on the car. It will be good to have a 100-lapper and get that extra seat time.”

Last weekend, Hines raced with the USAC Amsoil National Sprint Car Series at Tri-State Speedway in Haubstadt, Ind., finishing 13th after lining up 21st in the 30-lap main event, in a race that was co-sanctioned with the Midwest Sprint Car Series. Thus far in 2013, he has made six starts with the series and has finished 13th or better in each and every race.

Entering the USAC Amsoil National Sprint Car Series event at Bloomington Speedway, Hines is eighth in points, just 24 markers out of the top-five and 53 out of the lead. He has won twice this season, which is second-most in the series. Last season, Hines finished ninth in the USAC Traxxas Silver Crown Series standings and enters this season with nine career Silver Crown wins, which is ninth on the series all-time win list.