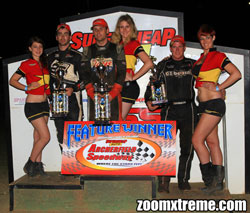 Ian Madsen has added his name to the list of genuine Australian Sprintcar Championship contenders with an emphatic win in the fourth annual Capalaba Wreckers Sprintcar Cup at Supercheap Auto Archerfield Speedway on Tuesday night January 8, the NSW driver leading home James McFadden and Jason Johnson in the thirty-five lap Feature to pick up the $10,000 winner’s cheque.

Madsen ran down and passed early race leader Jason Johnson on lap eight with McFadden finding also finding a way past the American on lap eighteen to secure second spot. Madsen however used all his experience to keep just enough of a buffer between himself and McFadden throughout the second half of the race and despite some yellow light stoppages, he ran out the winner by a margin of just under one and half seconds.

Donny Schatz ended his 2012/13 tour to Brisbane in unfortunate circumstances, the World Of Outlaws Champion getting over the cushion and finding the turn three wall with less than a quarter of the race run. Schatz, who has again endeared himself to his legion of fans on this trip, heads back to the USA with a fifth, three seconds, one win and a DNF from his six starts including the Australian Sprintcar Open Preliminary Feature.

With the Supercheap Auto Australian Sprintcar Championship now just days away, on form it would be easy to pick McFadden and Ian Madsen as the two favourites for the coveted number one. In reality however, the Title race is a wide open affair – as it can be every year – and there’s certainly an intriguing mix of contenders amongst the fifty-seven driver nominations for the event.

Undoubtedly the cream will rise to the top and there will be the usual few surprises from both the new generation of racers and the veterans of the sport throughout the two qualifying nights in the lead-up to Saturday night’s Championship Final. It is the jewel in the crown of Australian Speedway, it is three massive high-stakes nights of racing, it is at Supercheap Auto Archerfield Speedway and it is an event you won’t want to miss!