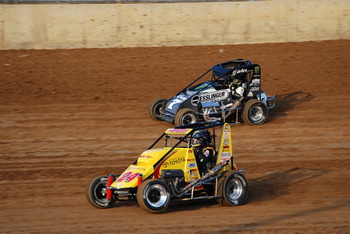 NEW CASTLE, Ind.— June 24, 2013— Tracy Hines has been strong on the big tracks with the USAC Amsoil National Sprint Car Series this season. Same goes for his program on the small tracks with the Honda USAC National Midget Dirt Championship. A pair of races over the weekend saw the same results as he recorded podium finishes in both a sprint car and midget on successive nights at I-96 Speedway in Michigan, and Angell Park Speedway in Wisconsin.

Hines led a total of 13 laps on Sunday, June 23 at the historic Angell Park, which is located just outside of Madison, Wis., in Sun Prairie. He started on the outside of the front row and took the lead for the first time on the fifth lap from Rico Abreu. Hines would pace the field for two laps before Caleb Armstrong took the top spot, though his night would end three laps later with mechanical trouble. This would hand the lead back to Hines who would stay out front until a lap-22 restart, when Abreu powered around him on the high side of the third-mile. Darren Hagen would then slip by Hines as well, who would end up third in the Parker Machinery/Powered by Toyota Spike.

Hines was sixth-fastest in time trials of the 26 drivers that toured Angell Park Speedway. He followed that up with a runner-up finish in the third heat race to punch his ticket into the 30-lap main event, which was a tri-sanctioned race for the Honda USAC National Midget Series, POWRi Lucas Oil National Midget Series and Badger Midget Auto Racing Association.

“We really didn’t need that last yellow,” said Hines. “I was running my race down low and was really making him (Abreu) have to go where I was not. He was obviously really good up top and the bottom of the track ended up going away late in the race. We always want to win, but a third is good, especially after having bad luck on the last night of Indiana Midget Week. We’ll just keep plugging away on our dirt midget program and try to get a little quicker each time we go to the track.”

At I-96 Speedway in Lake Odessa, Mich., on Saturday, June 22, Hines finished third in the 30-lap main event for the USAC Amsoil National Sprint Car Series aboard the Hansen’s Welding Inc./Motor City Auto Transport DRC. The 2002 series champion lined up 10th and steadily worked his way forward. A couple of late race restarts bunched the field up and allowed Hines an opportunity to pick up a couple of more spots. On the final circuit, he dove under Dave Darland to take third as they came off the fourth turn.

“I-96 is definitely a fast place,” he noted. “The bottom of the track really came in and were able to pick off quite a few guys that were running the top. I was kind of surprised that we were able to get going as well we were and gain so many spots with how fast the track was. After having some trouble earlier in the night during qualifying to end up third was a decent night for us.”

The Tony Hulman Classic for the USAC Amsoil National Sprint Car Series at the Terre Haute Action Track, which was scheduled for Friday, June 21, fell to rain after time trials. Hines qualified 10th of the 23 entries for the event, which was originally postponed by rain last month.

Hines is currently seventh in the USAC Amsoil National Sprint Car Series standings. He has won twice this season and has five top-10 finishes. The veteran driver is sixth in points with the Honda USAC National Midget Dirt Championship, just 20 markers out of the top-five. He’ll return to action next weekend at Pikes Peak (Colo.) International Raceway in a doubleheader for the USAC Traxxas Silver Crown Series and the Honda USAC National Midget Series Pavement Championship.

“The next few weeks are going to be very busy that’s for sure,” said Hines. “We’ll take advantage of the time we have this week to kind of get ahead before we go to Pikes Peak. Then when we get back, we’ll have a few races and it will be (Indiana) Sprint Week. As a driver this is the time of the year you look forward to, though as a mechanic and car owner it can definitely be a taxing time, so you have to be as prepared as you can and keep after the little things.”