A Trio of Top-10s for Kraig Kinser, Including a Podium at Dodge City, Leading into the ‘Month of Money’ 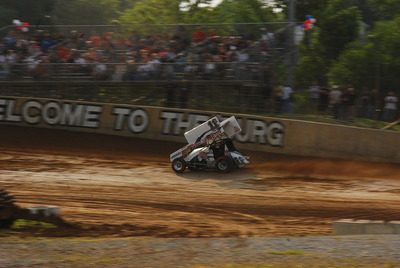 A Trio of Top-10s for Kraig Kinser, Including a Podium at Dodge City, Leading into the ‘Month of Money’
By Kraig Kinser Racing PR

BLOOMINGTON, Ind.— July 7, 2013— With the biggest, highest-paying races of the season just around the corner, this is the time of the year that Kraig Kinser always strives to be at his best, when competing with the World of Outlaws STP Sprint Car Series. With a trio of races this past weekend setting the stage for the upcoming “Month of Money,” Kinser recorded three top-10 finishes at a couple of tracks, earning the KSE Racing Products Hard Charger Award, twice in that span aboard the Casey’s General Store/Mesilla Valley Transportation Maxim.

Returning to Dodge City Raceway Park in Kansas, for the Boothill Showdown, as the defending winner of the finale of that two-night event, Kinser found himself on the podium again at the high-banked, three-eighths-mile, finishing third on Friday, July 5. He started fifth and moved up a spot on the start and broke into the top-three on the seventh circuit. He would take the second spot from eventual race winner Donny Schatz on lap-8, with the latter reclaiming that position a lap later. A rash of cautions late in the race for flat tires cut the race short by a lap, with Kinser crossing the line third.

The third-generation driver turned the ninth-fastest lap in time trials of the 24 entries on the first night at Dodge City. That put him on the front row of the second heat race, which he won over his father, Steve. In the dash, the younger Kinser lined up seventh and came home fifth to start on the inside of the third row for the main event.

In the finale of the Boothill Showdown, Kinser powered his way from the 14th starting spot to finish seventh. He gained a couple of positions early in the race and steadily worked his way forward over the course of the 30-lapper. Only one caution period slowed the race on lap-22 and Kinser lined up tenth on the ensuing double-file restart and gained three spots when the green flag came back out. He would cross the line seventh to earn his 20th top-10 finish of the season. Kinser timed in 14th in the finale at Dodge City and finished fifth in the second heat race.

“We definitely had a strong car again in the feature,” he noted. “Both nights, we really had a good set-up at the end of the night. Dodge City (Raceway Park) is a place where track position and especially your starting spot is very, very important. We’ve been working on our qualifying package quite a bit lately and are starting to turn the corner in that area, which is helping us start more toward the front. Starting up front is the key to giving yourself a shot like we had on the first night at Dodge City.”

Kinser earned the KSE Racing Products Hard Charger Award at Huset’s Speedway in South Dakota, on Wednesday, July 3, coming from the 14th starting spot to finish sixth. He gained a couple of positions early in the race and found himself in the top-10 just past the halfway mark of the 35-lap contest. Kinser used a strong restart with five laps remaining to move into seventh and picked up one more spot on the final lap. He was eighth in time trials at the high-banked, three-eighths-mile and finished third in the fourth heat race to punch his ticket into the 35-lap A-Feature.

“The car was definitely there later in the race and we were able to keep picking spots off,” noted Kinser. “That late restart really helped us and I was able to get around a few people. The last few times we’ve been up to Huset’s (Speedway), we’ve been consistent. We really seem to have a good set-up on the smaller, high-banked tracks right now.”

Kinser is currently 11th in the World of Outlaws STP Sprint Car Series championship standings, with one win and 20 top-10 finishes this season, with seven of those being top-five showings. He returns to action on Wednesday, July 10 in the Ohio Logistics Brad Doty Classic Presented by Racing Optics at Limaland Motorsports Park in Ohio, followed by the Knight Before the Kings Royal and the Kings Royal at the famed Eldora Speedway on Friday, July 12 and Saturday, July 13.

“We always look forward to the Brad Doty Classic,” said Kinser. “Limaland (Motorsports Park) is such a racy place and Brad (Doty) and everyone involved does such a great job. The Kings Royal is the Kings Royal and one of the crown jewels of the sport. We passed a lot of cars there last year, so hopefully we can start a little closer to the front this year.”