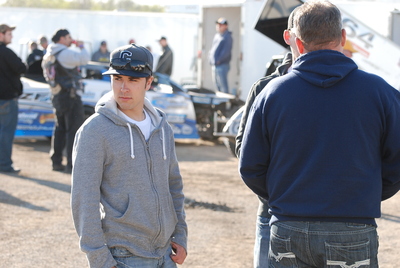 WATERTOWN, Conn.—July 7, 2013— David Gravel rode his 900-plus horsepower sprint car into the Old West of Dodge City, Kansas, this past weekend with the World of Outlaws STP Sprint Car Series for the Boothill Showdown, and “Got out of Dodge” with an eighth-place finish in the opener of the two-night event. For the driver of the FMR Racing/JRC Transportation/Musco Fuel/Model Craft J&J, it was his first trip to the state-of-the-art three-eighths-mile.

In his debut at Dodge City Raceway Park on Friday, July 5, Gravel finished eighth, in an event that was cut short due to track conditions that led to a multitude of flat tires and caution flag periods in the late going. The native of Watertown, Conn., started 10th and gained a spot on the opening lap. He would move by three-time series champion Sammy Swindell on the third circuit to take the eighth position and would remain there for the duration of the main event. The caution flag waved four times over the last four laps — all for flat tires.

Gravel kicked-off his maiden voyage to Dodge City by recording the 11th-quickest lap in qualifying, earning the pole position for the second eight-lap heat race. The 21-year-old would finish second in the heat to put himself in the dash. He would start ninth in the dash and finished 10th to lineup on the outside of the fifth row for the originally scheduled 30-lap A-Feature.

“We were glad to finish the race, especially with all the tires that people were losing,” Gravel said. “You can’t complain about a top-10 finish on a night like that. Dodge City is definitely a challenging place, with how hot it gets out there and the strong winds that we battled most of the day and night. It’s a tricky surface and you really have to keep after it.”

Gravel ended up 13th on the final night at Dodge City on Saturday, July 6. He lined up 10th and powered his way up to eighth on the opening circuit, before slipping back to ninth. Gravel got a little out of shape on the third go-around and dropped one more position. He was running just outside of the top-10 on the 22nd lap when the only caution flag of the night flew. He would restart 11th and ended up crossing the line 13th at the conclusion of the 30-lapper. Gravel was eighth-fastest in qualifying, which put him on the front row of the second heat race, where he came home second to earn a spot in the dash. He finished 10th in the dash and lined up on the outside of the fifth row for the A-Feature.

“We got ourselves in the dash, which is always one of our biggest goals each night,” he shared. “We were just a little off in the feature and against the Outlaws you cannot be off. You have to have your ‘A-Game’ every night out here. We learned a few things that hopefully will help us later in the season on tracks that size.”

At Huset’s Speedway in Brandon, S.D., on Wednesday, July 3, Gravel finished 19th in the World of Outlaws STP Sprint Car Series annual appearance at the high-banked, three-eighths-mile, which played host to the largest crowd in the 50-plus year history of the track. Gravel timed in 25th and came from seventh to fifth in the first heat race to earn a spot in the main event.

Gravel is currently eighth in the World of Outlaws STP Sprint Car Series championship standings. He has one victory this season to go along with 18 top-10 finishes, of which five are top-five showings. The native of Watertown, Conn., returns to action this week with the running of the 25th Annual Ohio Logistics Brad Doty Classic Presented by Racing Optics at Limaland Motorsports Park in Ohio, on July 10, followed by the legendary Kings Royal at Eldora Speedway on July 12–13.

“It’s kind of hard to believe the ‘Month of Money’ is already here,” said Gravel. “We have a ton of races coming up and this is the time of the year you really want to step things up and give yourself a chance each and every night. Our qualifying package has picked up the last few weeks and that will be very important, especially at Eldora (Speedway) and Williams Grove (Speedway) and places like that. This is going to be a busy week, driving back from Dodge City and getting ready for Limaland (Motorsports Park) and Eldora.”