Best of Both Worlds: Kraig Kinser Heads to Stockton & Chico this Weekend 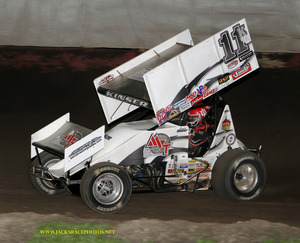 Bloomington, Ind.—March 20, 2013— The World of Outlaws STP Sprint Car Series has a long history, with a handful of tracks that have been around since the early days of the series. Building on this legacy, the series continues to visit new tracks as well. That will be the recipe this weekend, as Kraig Kinser and his fellow competitors will race at the Stockton 99 Dirt Track for the first time, while also making a stop at the storied Silver Dollar Speedway as the West Coast swing continues in California.

Kinser will make his debut at Stockton 99 Dirt Track in Stockton, Calif., on Friday, March 22, piloting the Casey’s General Store/Mesilla Valley Transportation Maxim, followed by a visit to Silver Dollar Speedway in Chico, Calif., for the Mini Gold Cup on Saturday, March 23.

Stockton 99 Dirt Track, a semi-banked, three-eighths-mile, which sits on the grounds of the San Joaquin Fairgrounds, will be one of three tracks that the World of Outlaws STP Sprint Car Series will be visiting for the first time in 2013. Kinser has raced once this season on a three-eighths-mile, finishing ninth at Tucson International Raceway in Arizona.
“I always look forward to going new tracks,” he shared. “Seeing a track that you’ve never been to is always helpful, because you learn new things at every track. Each track has its own characteristics and I like running all of the track we race at. That’s one of the reasons I love running with the World of Outlaws is because you get to see so many tracks. It’s also fun to go to a track that everyone is on equal ground at.”

Kinser finished sixth last season in the Mini Gold Cup at Silver Dollar Speedway, which was shortened to a one-night event due to rain. He opened that night as the fastest qualifier of the 36 drivers on-hand, turning a lap of 12.458-seconds, which was one of six fast time awards he claimed during the 2012 campaign. He finished fifth in the first 10-lap heat race to earn a spot in the dash. He started sixth in the dash and finished in that same spot, which put him on the outside of the third row for the 35-lap main event.

The third-generation driver returned to Silver Dollar Speedway in the fall for the Gold Cup Race of Champions, where he finished 12th on the first preliminary night, was ninth on the second prelim night and came home 17th in the 40-lap A-Feature to cap the event. Kinser has made a total of 17 starts in his career with the World of Outlaws at Silver Dollar Speedway, picking up five top-10 finishes along the way, including a career-best third-place showing in the finale of the Mini Gold Cup in 2009.

“There are a lot of factors involved in if the track is similar in the spring to how it is in the fall at Chico,” explained Kinser. “The elements and weather play a big part of that. The more you run at Chico, the more experience that you get and the better off that you are, because you’ll see the track all different ways and be able to adjust accordingly throughout the night.”

Entering this weekend’s pair of races, Kinser is ninth in the World of Outlaws STP Sprint Car Series championship standings, just 24 markers out of the top-five. In the first eight races of the season, he has four top-10 finishes.