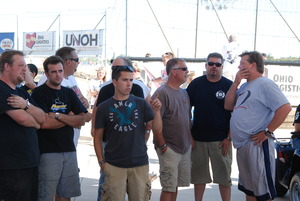 Watertown, Conn.—March 17, 2013 — Thunderbowl Raceway in Tulare, California, can be one of the toughest, most grueling and challenging tracks on the World of Outlaws STP Sprint Car Series schedule. This was certainly the case this past weekend as many of the veteran drivers battled with and were bit by the high-banked, third-mile bullring. How did David Gravel stack up in his first visit to Tulare? Pretty well, as he finished fourth on the opening night, continuing his role filling-in for the injured Bill Rose in the Fire Text Response Maxim.

“It took a little bit to get used to the track and the surface, but it reminded me a little bit of Haubstadt (Tri-State Speedway in Indiana) and that was helpful,” said Gravel. “All in all, I had fun there and we were able to get another top-five, which is great for Bill’s team. It’s a cool track and I look forward to hopefully going back there down the road.”
Gravel lined up fourth in the 35-lap main event on Friday, March 15 and was running in that same position on the opening lap when the first caution of the night flew, leading to a complete restart. On the second start, he ran fifth and found himself in seventh when the red flag came out on the eighth circuit. The native of Watertown, Conn., moved up a spot on the 10th lap and ran in that same spot when the second red flag of the night was displayed on the 15th go-around. He moved up to fifth on lap-15 when the leader stopped and took the fourth spot from series point leader Daryn Pittman on the ensuing restart. Gravel would remain fourth for the duration of the 35-lapper to earn his second top-five finish of the season.

Opening the night as the eighth-fastest qualifier of the 32 entrants, Gravel took to the track in the third starting spot in the fourth eight-lap heat race. He would finish second in that contest to earn a spot in the dash, where he would both start and finish fourth, which put him on the outside of the second row when the field was assembled for the A-Feature.

“Getting in the dash helped quite a bit as that gave us a good starting spot in the feature,” he noted. “I was still getting used to the track on Friday night and there were a few rough spots, so it was certainly a challenge. I lost a few spots in the feature, but I was able to get them back late in the race and to earn a top-five in my first time at Tulare, I am pretty happy with that.”

Gravel recovered from a mid-race flat tire on the final night at Tulare on Saturday, March 16 to work his way back up to a 16th-place finish on a track was very challenging to pass on. The young driver timed in 14th-fastest in time trials, just missing the heat race inversion by two spots. He started fifth in the second eight-lap heat race and finished in that same spot to earn a spot in the 35-lap main event. Gravel worked his way up to 11th on the initial start of the A-Feature, though an opening lap caution led to a complete restart. He was running 13th on lap-14 when he was forced to the work area with a flat right rear. Over the final 21 laps he would work his way from 23rd to 16th.

“If we hadn’t had the flat tire we probably would have been closer to finishing 10th or so, but we were still able to work out way back up after that, and on a track that was very hard to pass on,” Gravel shared. “Considering all of that, it wasn’t that bad of a night. We always want to finish a few spots higher, but we gave it our all and sometimes luck just works against you. We’ll stay positive and move on to the two races this coming weekend.”

“Things have gone pretty well so far on the West Coast,” said Gravel. “To have two top-five finishes in five races is pretty solid. There have been a few times where lack of experience has hurt us a bit, but we’re getting better. The main thing is qualifying in the right spot so we can get in the dash and start towards the front of the feature each night.”