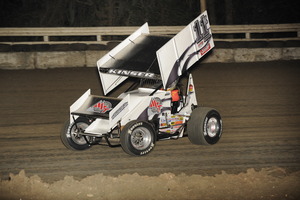 Bloomington, Ind.—March 17, 2013— There are a few tracks on the World of Outlaws STP Sprint Car Series circuit that really test a driver’s mettle. One of those is Thunderbowl Raceway in Tulare, Calif. The high-banked, third-mile usually requires a driver to “sit up in the seat” a little more than normal and get their “elbows up.” That was definitely the case on the opening night of the World of Outlaws two-night event at the track this past weekend. The finale presented a completely different challenge as the track was very slick and tough to pass on. Kraig Kinser battled both nights and was able to come away with a ninth-place finish in the finale as well as earning the KSE Racing Products Hard Charger Award in the opener.

“It was definitely a challenging weekend, but we kept working hard and battling,” said Kinser. “We were able to roll the car on the trailer in one piece and sometimes that’s an accomplishment in itself. We tested last week prior to Tulare and are finding little things in the car to work on and are still getting used to the new tires, especially on the smaller tracks. You have to look at the positives each night and build off those and that’s what we will do.”
Kinser was the eighth-fastest driver in time trials on Saturday, March 16 aboard the Casey’s General Store/Mesilla Valley Transportation Maxim. That qualifying effort would help him earn a spot in the dash, after finishing fifth in the third eight-lap heat race. The dash would find the third-generation driver taking the green flag in seventh and he would cross the line eighth, which put him on the inside of the fourth row for the 35-lap A-Feature.

Kinser was running eighth at the start of the main event, when the first caution flag of the night was displayed, necessitating a complete restart. On the second start he found himself in eighth again. He dropped one spot on the eighth lap to ninth and would run there for most of the remainder of the 35-lapper, which was plagued by a total of seven yellow and red flags. When the checkered flag came, Kinser crossed the line in ninth to earn his fourth top-10 finish in the first eight races of the 2013 campaign.

“We were able to get in the dash and that was big,” he shared. “It had been quite a few races since we had been in the dash and with how important track position was starting up front was a key to finishing in the top-10. One of our goals each night is to qualify well and get into the dash and that really dictates a lot of how your night will go.”

In the opener at Thunderbowl Raceway on Friday, March 15, Kinser earned the KSE Racing Products Hard Charger Award, finishing 18th, after starting 25th. The native of Bloomington, Ind., battled mechanical problems for most of the night. Trouble with the magneto forced him to miss his scheduled place in the time trial order and he received one lap at the end of qualifying. Kinser found himself starting eighth in the fourth eight-lap heat and finished sixth, coming up just one spot shy of transferring to the main event. Prior to the B-main, his team made an engine change, which forced him to miss that race and thus use a provisional to start the 35-lap main event.

“We were chasing gremlins all night with the car and we were able to make up a little ground in the feature,” Kinser stated. “There was a lot of attrition in that race, so we were glad to finish with the car intact and learned a few things we were able to use on Saturday night.”

Kinser, who is currently ninth in the World of Outlaws STP Sprint Car Series championship standings, just 24 markers out of the top-five, returns to action next weekend at the brand new Stockton 99 Dirt Track on Friday, March 22 and then heads to Silver Dollar Speedway in Chico for the Mini Gold Cup on Saturday, March 23.

“It’s still early in the season, but you always want to be as close as you can to the front,” he noted. “We’ll go through everything extra close on the car this week to get ready for the two races next weekend and keep our heads down and stay focused.”