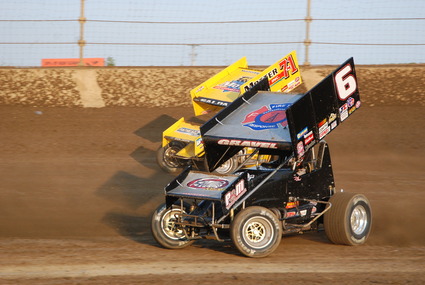 WATERTOWN, Conn.—June 9, 2013— One of the pluses of racing with the World of Outlaws STP Sprint Car Series is that when a driver/team encounters some bad luck there is usually another race just around the corner to rebound from that. David Gravel had more than his fair share of bad luck over the last few races, but he and his team continue to work hard and persist as the heart of the season rolls around.

Gravel was scheduled to compete in four races in a five-day period in the FMR Racing/JRC Transportation/Musco Fuels/Model Craft J&J under the Bill Rose Racing banner this past week, but Mother Nature had other ideas, cutting that stretch to three races in four nights. Each of the three venues he visited, he was making his debut at.

The three-race swing opened for Gravel at Kokomo (Ind.) Speedway on Wednesday, June 5 with a 14th-place finish. He started the 40-lap contest in 16th and worked his way into the top-10 by just the ninth lap. He would run 10th for a handful of laps before getting shuffled back on a couple of restarts. After dropping back to 17th just past the halfway point of the race he would work his way back forward to finish 14th. Gravel was 17th in time trials, missing the heat race inversion by a single spot. A seventh-place showing in the first heat race sent him to the B-main, which he won to earn a spot in the A-Feature.

“A few of those restarts really hurt us,” Gravel said. “Early in the race, the car felt great and I really made up a lot of ground on the high side of the track. Sometimes you want to see cautions and Kokomo was one of those instances where it probably would have benefitted us more if the race had stayed green. We learned a few things that should help our short track program going forward.”

Gravel recovered from an early race flip in the A-Feature at 34 Raceway in Iowa, on Friday, June 7 to finish 15th. The East Coast racer was 10th fastest in time trials, which put him on the front row of the second 10-lap heat race. He would win that heat to earn a spot in the dash, lining up third and finishing fourth. Gravel was running sixth on the sixth lap in the main event when he got upside and was forced to the work area. He was not able to make it out on the restart, but a second red flag before another full lap was completed allowed his crew, along with help from several other crews in the pit area, to continue working on the car. This time they were able to get him back out for the ensuinng restart. Gravel would work his way back through the field to finish 15th.

“First off, I have to thank all of the crews that chipped in with my guys to help get me back out there,” he shared. “That’s one of the coolest things about our sport is how everyone pitches in when a situation like that occurs. We had a really good car all night and qualified where we needed to and had a great starting spot in the feature. I just hooked the cushion wrong and at that point I was just along for the ride.”

On Saturday, June 8, Gravel got his first look at the half-mile Lakeside Speedway just outside of Kansas City, Kan. He would finish 13th in the 30-lap main event, which was part of a race program that was expedited due to impending rain. Gravel opened the night 15th in time trials and ran fifth in the third eight-lap heat race. The A-Feature was slowed twice in the opening three laps by cautions and then ran the remaining distance caution-free.

“It was tough to pass out there, no double about it,” noted Gravel. “We were glad to get the race in with the weather coming and unfortunately probably didn’t quite make all the adjustments we needed for the feature. We’ll keep plugging away and work hard this week and be ready for next weekend.”

The NAPA Auto Parts Outlaw Showdown at I-80 Speedway in Greenwood, Neb., scheduled for Sunday, June 9 fell to rain and will not be rescheduled.

Gravel is back in action on Friday, June 14 at Jackson Speedway in Minnesota, followed by a trip to the legendary Knoxville Raceway in Iowa, on Saturday, June 15. He’ll enter those two races seventh in the World of Outlaws STP Sprint Car Series standings with 12 top-10 finishes on the season, of which four are top-five performances.