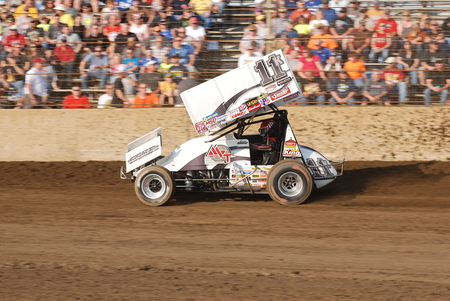 BLOOMINGTON, Ind.—June 9, 2013 — Kokomo Speedway has always been good to Kraig Kinser. Entering last week’s event at the quarter-mile bullring in North Central Indiana, he had several top-10 finishes, including three career wins at the track, with a pair those coming with the World of Outlaws STP Sprint Car Series. This time around, he ran among the top-five for a portion of the 40-lap main event on Wednesday, June 5 and wound up finishing eighth to record his 14th top-10 finish of the season with the series.

Kinser started seventh in the Casey’s General Store/Mesilla Valley Transportation Maxim and ran as high as fourth in the early going of the 40-lap contest that was slowed by three yellow flags and one red flag. Kinser opened the night by timing in 23rd-fastest. He would charge from the sixth starting position in the third 10-lap heat race to finish and earn a spot in the dash. The third-generation driver took the green flag 10th in the dash and ended up seventh.

“Getting in the dash was the key to turning out night around after qualifying,” Kinser said. “We didn’t time in where we wanted and that really put us back in the heat race, but the car was great in the heat and I was really able to charge to the front. In the feature a couple of restarts helped us early and then a couple hurt us late. With how racy the track was and all the dicing for position out there, we were happy to come away with an eighth and the car in one piece.”

At 34 Raceway in Iowa, on Friday, June 8, Kinser finished 17th in the 34-lap main event that was slowed by three cautions and two red flag periods. He opened the night with the 21st-quickest time in qualifying of the 43 entries, which put him sixth in the first 10-lap heat race. He would finish fifth in that contest to transfer to the A-Feature.

“There were a lot of good cars at Burlington (34 Raceway) and that put an even bigger emphasis on qualifying than normal and we just missed it a bit in time trials,” shared the native of Bloomington, Ind. “We were less than a tenth-of-a-second from making the heat race inversion and that can really change the complexion of your night, especially if you start on the front row of a heat race. There were some cars that went out later than us, so there was still some speed left in the race track. We just have to find that right qualifying balance.”

Kinser also finished 17th on Saturday, June 8 in the FVP Outlaws at Lakeside event at Lakeside Speedway in Kansas. He lined up 19th for the 30-lap A-Feature on the semi-banked, half-mile oval. Following a pair of cautions in the first three laps, the remainder of the race went non-stop green-to-checkers on a track that was very challenging to pass on. Kinser opened the night 19th in time trials and finished seventh in the first eight-lap heat race.

“It was the same thing as Friday night, we just didn’t get qualified good enough and put ourselves in a pretty big hole,” he stated. “Track position is always important at Lakeside and we had that long green flag run after the two early cautions and everyone got really spread out on the track. Our main focus right now is qualifying and we are going to work hard on our qualifying program this week, especially for the bigger tracks.”

The NAPA Auto Parts Outlaw Showdown scheduled for Sunday, June 9 at I-80 Speedway in Greenwood, Neb., was rained out and will not be rescheduled.

Kinser, who is currently 11th in the World of Outlaws STP Sprint Car Series championship standings on the strength of 14 top-10 finishes, returns to action on Friday, June 14 at Jackson Speedway in Minnesota, followed by a visit to the famed Knoxville Raceway in Iowa, on Saturday, June 15.