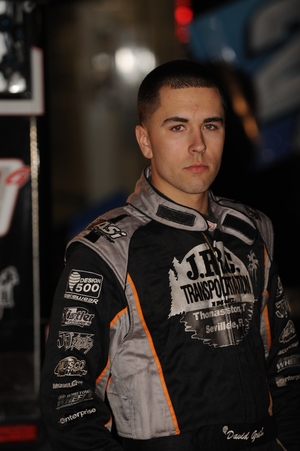 Watertown, Conn.—March 4, 2013 — Drivers never want to see a fellow driver get injured and in the unfortunate circumstance that a counterpart does suffer an injury, the pit area bands together to help out their fallen comrade. David Gravel will do his best to carry the torch this week for Bill Rose, who suffered a broken left arm that required surgery, on the second night of the season at Volusia Speedway Park last month. Rose has tabbed Gravel to fill-in for him for at least the next five races aboard the No. 6 Fire Text Response Maxim with the World of Outlaws STP Sprint Car Series. Gravel will compete in three races this week in Las Vegas and Tucson as the World of Outlaws kick-off a six-week West Coast swing.

“It’s unfortunate luck for Bill (Rose) to get injured,” said Gravel. “I’m going to do my best to get some good finishes for him. To be in a World of Outlaws car is a great opportunity for me and to get to visit some new tracks as well is something I am really looking forward to.”

Gravel, who has one career World of Outlaws STP Sprint Car Series main event win, will make his debut at the half-mile at The Dirt Track at Las Vegas Motor Speedway on Wednesday, March 6, with the two-night program concluding on Thursday, March 7. Each night will consist of a full race program beginning with hot laps and time trials, followed by heat races, a dash and A-Feature event.

“Hot laps will be pretty important each night and paying close attention to what lines we runs and how the track is,” shared Gravel. “Usually I do pretty good on the bigger tracks, so going from Volusia last month to Las Vegas this week should not be too big of an adjustment. My crew chief Tyler (Swank) has been there quite a few times, so he knows what to expect and that always helps as well.”

Gravel will head to the southwest following the two nights at Las Vegas, where he’ll visit another track for the first time as the World of Outlaws STP Sprint Car Series make their first appearance since 2007 at Tucson International Raceway on Saturday, March 9, for the Wildcat Shootout Presented by NAPA Auto Parts. Tucson International Raceway is a semi-banked, three-eighths-mile and Gravel has raced twice on a track that size this season with the UNOH All Star Circuit of Champions at Bubba Raceway Park in Florida, where he finished fifth and sixth.

“I usually adapt to new tracks pretty well, so hopefully that’s the case at Tucson,” he noted. “Most of the guys on the road with the Outlaws have been to so many tracks that even at a place like Tucson that they haven’t been to for a while, they still have notes from other places they can compare it to, so that may give them a bit of an advantage, but you try not to think about stuff like that.”

Gravel, who opened the season last month with the World of Outlaws in the UNOH DIRTcar Nationals Presented by Summit Racing Equipment in his familiar No. 89G (which he will again pilot, once Rose returns), will also contend for the series Kevin Gobrecht Rookie of the Year Award under a new format implemented for 2013. To be considered for the Kevin Gobrecht Rookie of the Year Award Presented by ButlerBuilt, a driver must participate in at least 50 percent of the races scheduled in 2013, with the formula used to determine the top rookie based on average feature event finish.

“The timing was right with the rules being adjusted for Rookie of the Year candidates,” Gravel explained. “I would have loved to run a whole year under the old format, but they opened it up so that more people have a chance and with how things are today it was a good decision by them. I’m definitely excited and hopefully we can get a lot of strong finishes this year and be in contention for some wins.”

Gravel enters the trio of races this week 17th in the World of Outlaws championship standings, just 26 markers out of the top-10. He finished eighth on the second night of the UNOH DIRTcar Nationals at Volusia Speedway Park in Florida last month, coming all the way from the 22nd starting position, earning the KSE Racing Products Hard Charger Award in the process. He also qualified for the main event on the other two nights at Volusia.

“The first goal at each of the races this week is to make it into the feature,” he said, when asked about Las Vegas and Tucson. “Then the next goal is to get into the top-10 or top-five at the finish. Obviously, we want to win races, but you have to get into the race first and then put yourself in a good position to be in contention and we’ll try out best to do that.”