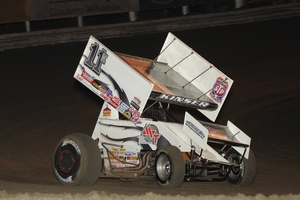 Bloomington, Ind.—March 4, 2013— Kraig Kinser has traditionally run pretty well on the West Coast with the World of Outlaws STP Sprint Car Series. With an extended early season West Coast swing that opens this week in Las Vegas and Tucson, Ariz., the third-generation driver looks to carry the momentum he gained during the season opening events in Florida to the West Coast.

Kinser opens the two-night World of Outlaws STP Sprint Car Series event at The Dirt Track at Las Vegas Motor Speedway in the Casey’s General Store/Mesilla Valley Transportation Maxim on Wednesday, March 6 and Thursday, March 7. A full racing program is on-tap each night, culminating with 30-lap main events. The series then heads to Arizona for the Wildcat Shootout Presented by NAPA Auto Parts at Tucson International Raceway on Saturday, March 9.

“The way our schedule is you get quite a few days of racing in at Volusia and then have a pretty long break,” said Kinser. “I’m definitely ready to get back in the car at Las Vegas. Mikey (Kuemper-crew chief) stayed on top of things the last few weeks and we should be pretty good right out of the box this week.”

Last season at Las Vegas, Kinser finished 10th in the finale of the two-night event to earn his seventh career top-10 finish at the half-mile. He opened the night by qualifying second-fastest of the 26 cars that were in attendance. The native of Bloomington, Ind., lined up fourth in the second eight-lap heat race and charged to a runner-up finish to earn a spot in the dash. Kinser finished eighth in the dash, after starting fifth. He finished 13th in the A-Feature on the opening night.

The 2005 winner of the Knoxville Nationals has made a total of 12 main event starts in his career at Las Vegas. He was victorious in “Sin City” in a preliminary feature in 2005 and followed that up with a runner-up finish in the finale of that two-night event. Kinser made his debut at the state-of-the-art facility in 2003 and has competed at the track in seven different seasons with the World of Outlaws.  He has finished in the top-10 in seven of his last nine starts at Las Vegas dating back to 2004.

“Las Vegas is a high-speed, half-mile like Volusia, so it’s similar to what we’ve already been on this year,” he explained. “It sounds like there is going to be a lot of cars, which is always good. Competition is what drivers our sport and it’s always good to see the car counts coming back up. Qualifying will be very important with the strong field of cars that will be there.”

Kinser will be visiting Tucson International Raceway for the second time in his career. He made his debut at the three-eighths-mile in 2011 during the Western World Championship in a 360-sprint car event sanctioned by the American Sprint Car Series. He raced his way into the main event on the first qualifying night of that three-night show and just missed qualifying for the main event in the finale.

“Tucson has some pretty unique characteristics to it,” Kinser shared. “The backstretch really creeps up on you. It will be a little different going there this time, because I’ll be in a 410 (sprint car) and my own car. Having been there before, there are not quite as many unknowns as if we had never been there.”

The early season West Coast swing for the World of Outlaws STP Sprint Car Series will consist of 12 races at 10 tracks in three states. Kinser heads west fourth in the series championship standings, just 36 markers out of the lead, after earning a pair of top-10 finishes at Volusia, including a season-best third-place showing on the second night of the season.

“We’re looking to get back in the swing of things,” said Kinser. “We’ve been around it long enough that even after having a few weeks break like we’ve had it all comes back pretty quick. It’s good to have as many races out west as we’re going to have this year and hopefully the rain stays away.”


Keep up with all the action
For the latest news on Kraig Kinser, visit http://www.kraigkinser.com, and follow Kraig on Twitter at http://twitter.com/kraigkinser11kand receive live updates from the track each and every race night.