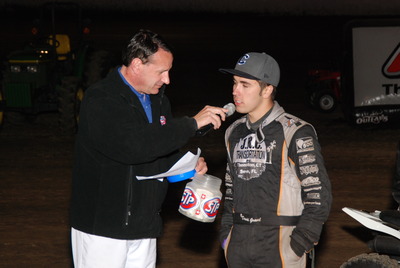 WATERTOWN, Conn. — Sept. 18, 2013— David Gravel has visited quite a few new tracks this year as he has competed full-time with the World of Outlaws STP Sprint Car Series, and while he has gotten up to speed pretty quick at most of those facilities, it’s always a little bit of an advantage for him to race at venues that he has turned numerous laps at in the past. Two such tracks are the famed Eldora Speedway in Ohio and the historic Lernerville Speedway in Pennsylvania, the site of this weekend’s pair of events for the World of Outlaws STP Sprint Car Series.

The World of Outlaws STP Sprint Car Series portion of the 4-Crown Nationals at Eldora Speedway is set for Friday, Sept. 20. Gravel will then make the trek north to the Pittsburgh area for the Commonwealth Clash at Lernerville Speedway on Saturday, Sept. 21, piloting the FMR Racing/JRC Transportation/Musco Fuel/Model Craft J&J.

Gravel has made four starts at Eldora Speedway this season, earning a pair of top-10 finishes. In July, he qualified for the main event during the Kings Royal for the first time in his career and powered his way from the 19th starting position to finish ninth, earning the KSE Racing Products Harder Charger Award in the process. Gravel finished seventh in his first start of the year at the half-mile, back in the spring, while filling in for the injured Bill Rose. Last season at Eldora, the 21-year-old was fastest in time trials on three separate occasions with the World of Outlaws STP Sprint Car Series.

“Eldora is always a challenging place and you never know who will be there, so you have to definitely be on your game,” Gravel said. “I have a lot of laps there and have had some good runs, so we always feel pretty good when we go over there. The main thing is keeping up with the track all night, because it changes from the time we go out for hot laps until the main event.”

“We had tough luck last time we were at Lernerville, but we had a fast car and were able to run up front in the second feature,” he shared. “Lernerville is a racy track where you really get up on the wheel and it seems to fit my driving style pretty well. We know we are capable of running up front there and the goal is to put together a complete night.”

Last weekend, Gravel made his return to competition with the World of Outlaws STP Sprint Car Series, after missing a month of action, due to a bout with mononucleosis, an enlarged spleen and a double ear infection. In his first race back at Clay County Fair Speedway in Iowa, Gravel finished 11th. The following night at Deer Creek Speedway in Minnesota, the East Coast racer was 14th.

“It felt good to get back in the car last weekend,” he noted. “We qualified well both nights, which is always good and made it into one of the dashes. I was a little rusty on the starts and restarts, but by the end of each night I improved and felt pretty comfortable in the car again.”

Gravel enters this weekend’s pair of races as the leading contender for the Kevin Gobrecht Rookie of the Year Award with the World of Outlaws STP Sprint Car Series. He has two victories this season, including winning on the first preliminary night of the Knoxville Nationals. He also found himself in the winner’s circle at I-94 Speedway in Minnesota in May. Gravel has 24 top-10 finishes thus far in 2013, with seven of those being top-five showings.

“We want to be as competitive as we can down the stretch this season,” Gravel said. “We really want to win another race before the year ends and are sure going to give it everything we got. Making every feature is out first objective each night and then from there we can focus on making the right adjustments to hopefully be in contention.”