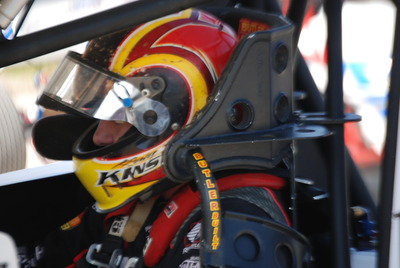 Bloomington, Ind.— Sept. 18, 2013— After the frenetic pace of races the World of Outlaws STP Sprint Car Series saw recently during the West Coast Swing, just eight races left in the 2013 campaign. Kraig Kinser looks to finish the season on a strong note and is seeking to break into the top-10 in the series standings. He’ll have two chances this weekend to gain points as he visits two of the most historic tracks on the circuit — Eldora Speedway and Lernerville Speedway.

The World of Outlaws STP Sprint Car Series portion of the 4-Crown Nationals at Eldora Speedway in Rossburg, Ohio is set for Friday, Sept. 20. The series then heads to Western Pennsylvania on Saturday, Sept. 21 for the Commonwealth Clash at Lernerville Speedway just outside of Pittsburgh.

Kinser has made four starts this season at Eldora Speedway in the Mesilla Valley Transportation/Casey’s General Store/King Racing Products Maxim. His best finish this season at the half-mile was a sixth-place effort in the Kings Royal in July. Kinser lined up 11th for that 40-lap contest and made up quite a bit of ground late in the race. He opened the event as the 11th-fastest qualifier and finished second in a heat race to lock himself into the fabled event.

The native of Bloomington, Ind., has made a total of 42 main event starts with the World of Outlaws STP Sprint Car Series at the half-mile in his career, including in preliminary features. He has recorded 13 top-10 finishes at Eldora, with four of those being top-five performances. He finished a career-best third in the spring of 2005 at the half-mile.

“We had a good run in the Kings Royal for the second straight year,” said Kinser. “Obviously, the track is a little different when we come back now in the fall versus in the heat of the summer. There are probably going to be quite a few cars at Eldora this week, so qualifying is going to be just as important as ever, as is getting in the dash.”

Kinser visited Lernerville Speedway earlier this season for the Don Martin Memorial Silver Cup Twin 30s. He lost a right rear tire while running second in B-main and thus did not qualify for the main event. Last fall, the third-generation driver, finished ninth in the Commonwealth Clash at Lernerville. Kinser came home a career-best fifth at the high-banked, four-tenths-mile in the 2011 Commonwealth Clash. He has made a total of 17 main event starts in his career at Lernerville.

“It was definitely tough sledding at Lernerville in the summer,” he shared. “We had a pretty fast car and just had no luck on our side and got caught up in a couple of tough situations and unfortunately didn’t have a chance to make the feature. The folks at Lernerville always do a great job preparing the surface, so we know we’ll have plenty of racing room.”

Kinser, the 2005 winner of the Knoxville Nationals, is 11th in points with the World of Outlaws STP Sprint Car Series entering this weekend, just 13 markers out of the 10th spot. He has one victory this far in 2013 to go along with 32 top-10 finishes, of which eight are top-five performances.