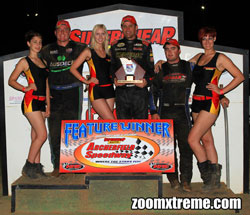 The name Madsen was in the victory circle for the second time this week at Supercheap Auto Archerfield Speedway, this time however it was Kerry who backed up brother Ian’s win in the Capalaba Wreckers Sprintcar Cup with a victory of his own in the Preliminary Feature on night one of the Australian Sprintcar Championship.

Madsen led home Andrew Scheuerle and Steven Lines in the twenty-five lap event, eventually taking the win by a comfortable margin after earlier being involved in an enthralling battle for the lead with Lines who led laps 10-13 before Madsen regained the ascendency. Lines would lose the runner-up spot to Scheuerle just laps later and hold onto the final podium spot ahead of six-time Champ Garry Brazier and Danny Reidy.