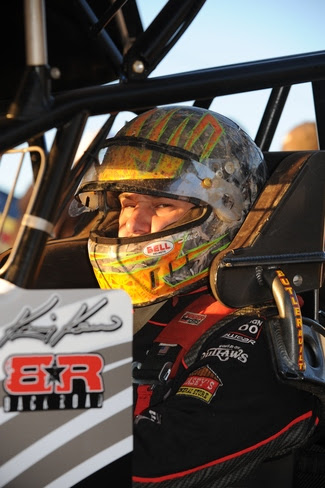 BLOOMINGTON, Ind. — March 16, 2014— On the opening night for the World of Outlaws STP Sprint Car Series at Merle Stone Chevrolet Thunderbowl Raceway the main event ran green-to-checkers, without a single caution. That was not the case on the second night, as a pair of red flag and also two yellow flag periods slowed the action, leading to four restarts, three of which were double-file. Kraig Kinser took full advantage of these restarts, gaining positions on three of the four, en route to an eighth-place finish in the Mesilla Valley Transportation/Casey’s General Store/King Racing Products Maxim.

Kinser lined up 10th for the 35-lap A-Feature on Saturday, March 15, after earning a spot in the dash for the fourth time this year. The third-generation driver ran in that position for the first 10 laps, before moving up to ninth on a lap-11 double-file restart. He would move up another spot, two laps later, on yet another restart. A caution on lap-15 saw Kinser move into seventh on the restart and he would run in that position before Kerry Madsen slipped by. The eighth-place finish for Kinser was his third top-10 run of the young season and helped him move up a spot to ninth in the World of Outlaws STP point standings.

Kinser lined up 11th in the opener at Tulare on Friday, March 14, and fell back a couple of spots at the start. He ran 13th for the first three laps, before Tim Kaeding got by him. Kinser would move back into 13th on lap-15 and would remain in that position for duration of the 35-lap A-Feature, which ran non-stop.

The weekend at Tulare opened for the winner of the 2005 Knoxville Nationals with a fifth-place effort in time trials of the 31 drivers in attendance. Kinser started third in the second heat race and finished fourth. He just missed earning a spot in the dash by one time trial position.

The “Spring Break Tour” continues for Kinser on Saturday, March 22 in the FVP Western Spring Shootout at Stockton 99 Dirt Track in Stockton, Calif. Kinser will enter that event ninth in the World of Outlaws STP Sprint Car Series championship standings.