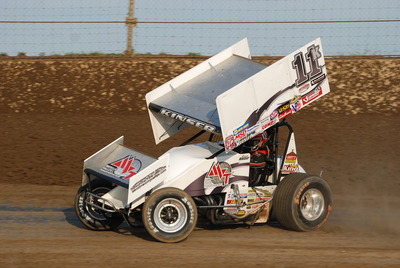 BLOOMINGTON, Ind. — Sept. 9, 2013— Kraig Kinser had one major objective during the recent Gold Rush Tour for the World of Outlaws STP Sprint Car Series and that was to turn in consistent runs. He was able to achieve this, recording five top-10 finishes in eight events over a 10-day span at six different tracks in three states on the West Coast aboard the Mesilla Valley Transportation/Casey’s General Store/King Racing Products Maxim.

In the opener of the Monster Energy Meltdown at Skagit Speedway in Alger, Wash., on Friday, Aug. 30, Kinser finished sixth. He ran as high as second during the 25-lap main event, which was marred by several caution flags. Kinser opened the night by recording the eighth-quickest lap in time trials, which put him on the front row of the second heat. He would finish second to earn a spot in the dash, where he also finished second. In the finale of the Monster Meltdown on Saturday, Aug. 31, Kinser finished 11th

The native of Bloomington, Ind., charged from the 19th starting spot to finish eighth at Grays Harbor Raceway in Elma, Wash., on Monday, Sept. 2. After finishing seventh in the second heat, Kinser came home third in the B-main to earn a spot in the 30-lap A-Feature. A total of six yellow flag and one red flag slowed the main event, providing several restart to make up positions.

In his second-ever visit to Willamette Speedway in Lebanon, Ore., on Sept. 3, the third-generation driver finished 10th. Kinser ran as high as seventh over the course of the 30-lap main event, which saw the yellow flag fly four times and the red flag displayed twice. He was fifth-fastest in qualifying to open the night.

Kinser finished 10th at Cottage Grove Speedway in Oregon, on Wednesday, Sept. 4. He opened the night as the fastest qualifier of the 31 entrants. He finished fifth in the first heat race to earn a spot in the dash. With an inversion of eight, Kinser lined up on the outside of the fourth row for the dash and finished ninth. In the 40-lap feature, which was plagued by three cautions and two red flag periods, Kinser ran as high as seventh before finishing 10th to earn his fourth career top-10 finish at the quarter-mile bullring.

On the opening night of the Gold Cup Race of Champions at Silver Dollar Speedway in Chico, Calif., on Friday, Sept. 6, Kinser was caught up in a wreck on the opening lap of the B-main and had too much damage to restart the race. He opened the night 27th-fastest out of 53 entrants in time trials. Kinser came home sixth in the second, 10-lap heat race, with just the top-four transferring to the A-Feature.

The finale of the Gold Cup on Saturday, Sept. 7, saw Kinser turn in the ninth-fastest lap in time trials of the 52 drivers that hit the quarter-mile. He finished fourth in the fourth heat race to earn a spot in the 40-lap main event. The third-generation driver took to the grid on the outside of the ninth row and wound up finishing 17th.

Kinser wrapped up the Gold Rush Tour with a ninth-place finish at Antioch Speedway on Sunday, Sept. 8. He kicked off the night as the second-fastest qualifier of the 33 drivers that took to the one-third-mile. He finished third in the second heat race to earn a spot in the dash where he came home eighth. Starting on the outside of the fourth row for the 30-lap main event, Kinser ran among the top-11 for the duration of the contest, crossing the finish line ninth to earn his 30th top-10 performance of the season.

The event at Southern Oregon Speedway in Medford, Ore., scheduled for Thursday, Sept. 5, fell to rain and was not rescheduled.