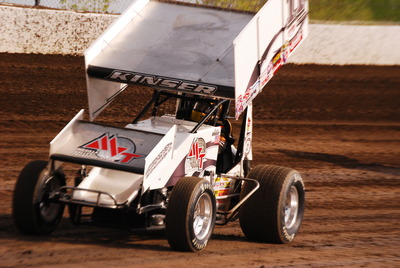 BLOOMINGTON, Ind.—July 1, 2013 — Carrying momentum from a pair of fifth-place finishes with the World of Outlaws STP Sprint Car Series at River Cities Speedway in North Dakota, and I-94 Speedway in Minnesota, Kraig Kinser had high hopes heading into the three events this past weekend. The trio of races started on a strong note for the native of Bloomington, Ind., as he came home ninth at LaSalle Speedway in Illinois, but didn’t quite end how he would have liked, as he was caught up in other driver’s accidents at both Beaver Dam (Wis.) and Cedar Lake (Wis.) Speedway. On the positive side, his crew was able to make repairs after each of those incidents and he got back out on the track to finish the two races in the Casey’s General Store/Mesilla Valley Transportation Maxim.

Kinser opened the weekend on Friday, June 28 at LaSalle (Ill.) Speedway, as the World of Outlaws STP Sprint Car Series returned to the high-banked, quarter-mile bullring for the first time since 2000, finishing ninth. Kinser started 14th in an event that took four starts before a full lap was completed. He worked his way into the top-10 on a lap-4 restart. The native of Bloomington, Ind., would run in 11th for most of the race, before trading that spot with Jason Sides a couple of times in the second half of the race. Kinser took 10th from Cody Darrah on lap-33 and move into ninth on the lap-39, getting around his dad Steve.

In time trials at LaSalle Speedway, Kinser was sixth-fastest of the 32 drivers checked-in. He started third in the second 10-lap heat race and finished third to punch his ticket into the 40-lap main event. He would line up 14th for the feature at the high-banked, quarter-mile.

“It was definitely a wild night at LaSalle, especially at the start, with all the cautions and reds we had,” said Kinser. “We were able to keep our nose clean and come away with a top-10 and the car was in one piece, so I can’t complain about that. The little tracks can certainly be challenging and when you finish a race like that to roll the car on the trailer intact, you’ve done something right.”

At Beaver Dam Raceway on Saturday, June 29, Kinser finished 15th, after having nowhere to go on lap-22 when a fellow driver flipped in front of him. He was running as high as sixth in the early stages of the 40-lap Jim Boyd “JB” Memorial and was 11th at the time of the accident. After a trip to the work area to change a flat right front tire and fix other front end damage, he rejoined the field to run the final 18 circuits.

“That was just one of those deals,” he stated. “We were just in the wrong place at the wrong time and there was nowhere I could go. I’m glad we were able to get back on the track and gain a few more positions. You’ll have nights like that and with how much we race, usually it all evens back out.”

Kinser opened the night at Beaver Dam as the 14th-fastest qualifier, which put him on the pole of the second heat, in which he finished second to earn a spot in the dash. He started 10th in the dash and finished ninth. When the field assembled for the 40-lap A-Feature, Kinser found himself on the inside of the fifth row.

During the World of Outlaws STP Sprint Car Series annual visit to Cedar Lake (Wis.) Speedway on Sunday, June 30, Kinser ran as high as 12th during the first half of the 35-lap main event. On the 25th circuit, a car got upside in front of him, leaving Kinser nowhere to go. After a trip to the world area, the 28-year-old would return to the track in the 17th spot. He would gain one more position to cross the line 16th, the same spot that he started in.

“The crew did a great job getting me back out there,” he noted. “That was a tough way to end the weekend, but it could have been worse. We have a couple of days to get the car ready for Huset’s and look to pick back up where we were after Grand Forks (River Cities Speedway) and I-94 (Speedway).”

Following the trio of races, Kinser is 11th in the World of Outlaws STP Sprint Car Series standings. He has one win thus far in 2013 to go along with 17 top-10 finishes, of which six are top-five showings. Kinser will return to action on Wednesday, July 3 at Huset’s Speedway in South Dakota, followed by a trip to Dodge City Raceway Park in Kansas, July 5–6.