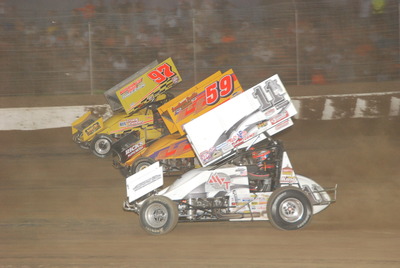 BLOOMINGTON, Ind. — July 14, 2013 — Opening the “Month of Money” on a strong note is what each and every World of Outlaws STP Sprint Car Series driver strives for. Kraig Kinser was able to do exactly that this past week as he finished sixth in the Kings Royal at the famed Eldora Speedway and was eighth in the Brad Doty Classic at Limaland Motorsports Park.
With the unique six heat Kings Royal format in place on Saturday, July 13, Kinser found himself lining up 11th for the 40-lap main event in the Casey’s General Store/Mesilla Valley Transportation/King Racing Products Maxim, after a runner-up finish in the fifth heat race. At the drop of the green flag, the native of Bloomington, Ind., moved up one spot and was into the top-10. He would run 10th until the eighth lap when he lost a spot. After falling back to 12th on lap-12, the veteran driver would begin to work his way back forward, taking a position in each of the next two laps to find himself back in the 10th spot.

“The car was pretty good feature,” said Kinser. “The Kings Royal is a tough event and with so many good cars there, to finish sixth, that’s nothing to be ashamed of. The last two years we’ve had a really good set-up for the 40-laps at Eldora, which is a long time on a track like that. We had a few cars in front of us have some trouble which helped, but we also passed some cars and worked pretty hard for it.”

Time trials for the Kings Royal inverted the fastest 24 drivers. Kinser clocked in 11th, which put him on the inside of the second row for the third heat race. The top-three finishers in each heat transferred directly to the Kings Royal, with Kinser coming home second, which put him 11th on the grid for the 40-lap, $50,000-to-win main event.

“If we would have won the heat we would have been on the outside of the front row, but Brad (Sweet) was really flying in the heat race and showed at the end of the night he was the class of the field. It’s definitely a unique format at the Kings Royal and it almost worked out to our advantage. All in all, we were happy with the night.”

Kinser charged through the field in the 25th Annual Ohio Logistics Brad Doty Classic Presented by Racing Optics at Limaland Motorsports Park on Thursday, July 11, finishing eighth, after lining up 26th. The native of Bloomington, Ind., gained eight spots in the opening three laps and was up to 11th by the fourth circuit. After falling back a few places in the middle portions of the 40-lap event, Kinser picked off seven positions over the final 10 laps to garner his third-career top-10 finish at Limaland.

“You never want to have to start at the back of the field, but when you do and you are able to salvage a top-10, it makes a difference,” he stated. “Limaland (Motorsports Park) is always a racy track, so you know you will have a good chance at making up some ground if you are in the back. We were just a little off in time trials and that put us behind until the feature. As always, Brad (Doty) and everyone at the track did a great job with the event.”

In the Knight Before the Kings Royal at Eldora on Friday, July 12, Kinser finished 20th in the 30-lap main event. He timed in 18th-fastest of the 45 entries and finished sixth in the second heat race, which put him in the B-main. A third-place showing in the B-main earned him a spot in the A-Feature which ran green-to-checkers without a single caution.

Kinser, who is currently 10th in the World of Outlaws STP Sprint Car Series standings, returns to action this week in the Don Martin Memorial Silver Cup at Lernerville (Pa.) Speedway, followed by a visit to Williams Grove (Pa.) Speedway for the Summer Nationals. He then heads to Lebanon Valley (N.Y.) Speedway and Rolling Wheels (N.Y.) Raceway Park next week.

“The next week is a busy one,” Kinser said. “We been preparing for this part of the schedule, so hopefully we did all the right things. As a driver, this is one of those weeks you always look forward to. It’s good to have the car rolling pretty well coming into this stretch.”