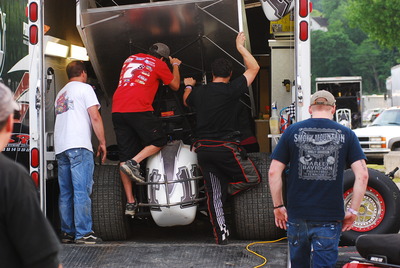 BLOOMINGTON, Ind. — June 27, 2013— High-banked short tracks are the name of the game this weekend for Kraig Kinser and his fellow World of Outlaws STP Sprint Car Series competitors. These types of tracks usually bode well for the native of Bloomington, Ind., who grew up racing on small, high-banked bullrings. A trio of steep speedways in the Midwest await as the series makes its only stop of the year in Illinois at LaSalle Speedway, followed by a traditional pair of races in Wisconsin, at Beaver Dam Raceway and Cedar Lake Speedway.

Kinser will make his first start at LaSalle Speedway in Illinois since 2010 on Friday, June 28 aboard the Casey’s General Store/Mesilla Valley Transportation/King Racing Products Maxim. The series then heads to Wisconsin for the annual visit to Beaver Dam Raceway on Saturday, June 29 for the Jim Boyd “JB” Memorial and Cedar Lake Speedway in New Richmond on Sunday, June 30.

Kinser finished ninth in his last visit to LaSalle in 2010. He opened that night by turning the second-fastest lap in time trials of the 26 entries. He finished third in the second 10-lap heat race to earn a spot in the dash, where he came home fourth, which put him on the outside of the second row for the start of the 35-lap A-Feature. Kinser raced at the quarter-mile for the first time with the World of Outlaws STP Sprint Car Series in 2004.

“LaSalle can be a pretty challenging and tricky track,” said Kinser. “It can be rough or it can be slick, you just have to see what the weather is like and the hand we are dealt by Mother Nature. LaSalle has long straightaways and tights turns. It’s a track where if you have everything right, you can make up some ground. It’s definitely a racy little track and a fun place to race at.”

The native of Bloomington, Ind., was victorious at Beaver Dam Raceway last season, taking the lead from his father Steve on lap-24. The third-generation driver has made 10 starts in his career at the high-banked, third-mile picking up five top-10 finishes in the process. He has raced at the Wisconsin oval in eight different seasons with the World of Outlaws STP Sprint Car Series.

“It’s always a plus to go to a place where you’ve won at or done well at in the past, because you know what it takes to contend there,” he noted. “Beaver Dam is a small track, but it can get real wide and real racy. We’ve run pretty well on the smaller tracks this season and should be able to use a little bit of what worked and what we learned last weekend at Grand Forks (River Cities Speedway).”

At Cedar Lake Speedway last year, Kinser finished sixth to earn his second-career top-10 finish at the high-banked, three-eighths-mile. The 2005 winner of the Knoxville Nationals made his first trip to Cedar Lake Speedway in 2004 and finished a very solid fourth in that event. The World of Outlaws STP Sprint Car Series has raced every year except one, since 1983 at Cedar Lake.

“Cedar Lake (Speedway) has a lot of banking and is a fast place,” said the third-generation driver. “The wall in turn two comes into play, especially when you are up top with all the momentum you carry around there. It’s a quick place, so you have to time in good and race good and like every night out here, getting in the dash and starting toward the front is a pretty important factor in how your night will turn out.”

Going into the final three races of June, Kinser sits 11th in the World of Outlaws STP Sprint Car Series championship standings. He has one win this season and has earned 16 top-10 finishes, with six of those being top-fives. Beginning this weekend, the series will race 19 times in a span of 34 days.

“With how much we’ll be racing in the next few weeks, you definitely have to start thinking and planning ahead,” he stated. “It’s going to be a busy for sure and if you are running good it makes it all go a lot smoother and that’s what we’re striving for. We had a good weekend last weekend and hopefully we can build on that this weekend.”