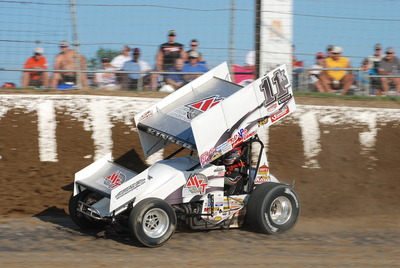 BLOOMINGTON, Ind.—July 16, 2013— With the way the World of Outlaws STP Sprint Car Series scheduled has shaken out this year, there have been a number of weeks where the series has raced three or four times in a seven-day stretch, which is exactly what Kraig Kinser enjoys most. Over the next eight days, he’ll put six more features races under his belt as the series competes in a handful of event during the second East Coast swing of the season.

The second East Coast swing of the season kicks-off for Kinser aboard the Casey’s General Store/Mesilla Valley Transportation/King Racing Products Maxim on Tuesday, July 16 at Lernerville Speedway, Sarver, Pa., with the running of the Don Martin Memorial Silver Cup Twin 30s. The series then heads to the famed Williams Grove Speedway in Mechanicsburg, Pa., Friday, July 19 and Saturday, July 20, for the running of the Summer Nationals. An overnight trip to New York will find the World of Outlaws STP Sprint Car Series making their annual stop at Lebanon Valley Speedway on Sunday, July 21, followed by the first of two visits to Rolling Wheels Raceway Park in 2013, on Tuesday, July 23.

“We had a busy week last week with three straight nights of racing and this week will be even busier,” said Kinser. “All of the tracks this week are high horsepower and it’s supposed to be pretty hot out, so we’ll have to adjust for that and see what the track surfaces do each night. A week like this definitely tests every fiber of man and machine.”

The Don Martin Memorial Silver Cup will again be comprised of twin 30-lap features this year. The first will be run by way of a standard World of Outlaws STP Sprint Car Series format, with the second main event lined up by an inversion of the lead lap cars from the opener. In his most recent start at Lernerville Speedway during the Commonwealth Clash last fall, Kinser finished ninth. He missed the Silver Cup main event in 2012, after he was caught up in an accident while leading the B-main, which damaged his car too much to have it ready in time for the main event. Kinser finished a career-best fifth at the high-banked, four-tenths-mile in the 2011 Commonwealth Clash. He has made a total of 15 main event starts in his career at Lernerville.

“Lernerville usually has two or three grooves and you can race just about anywhere on the track,” he noted. “The Twin 30s is a unique concept and the fans seem to enjoy it. With points being on the line the first race is obviously your focus, but then just as much money is on the line in the second, so you want to do your best in that one as well.”

Kinser made one start this spring at Williams Grove Speedway, finishing a very solid seventh. The second scheduled night of that event fell to rain and was not made up. The native of Bloomington, Ind., earned a pair of top-10 finishes at Williams Grove Speedway last season, including the best finish of his career at the half-mile during the Summernationals in July, when he came home fourth. He followed that up by finishing seventh on the first night of the National Open in the fall. The third-generation driver has made a total of 29 main event starts at Williams Grove in his career, including preliminary features, dating back to 2003, earning nine top-10 finishes in the process.

“We were pretty good at Williams Grove in the spring, so hopefully we can pick up where we left off there,” Kinser shared. “As always there will be a ton of cars and the pill draw and qualifying will certainly come into play. When you go into there you have to have the car rolling good and also everything under the hood in place. Going to ‘The Grove’ is always a good measuring stick to see where your program is.”

Kinser has made seven starts in his career at Lebanon Valley Speedway. He finished 12th at steeply-banked and blazing fast half-mile last season. Kinser raced at the New York oval for the first time in 2004 and finished a career-best 10th. He matched that result again in 2009.

“Lebanon Valley is a pretty unique track,” he noted. “You carry so much speed and momentum there and it can definitely be a tricky place to pass. Qualifying in the right spot and starting up front in the heat race and getting in the dash is usually the key. Everyone is usually bunched pretty close in qualifying, so you really have to be on your game there.”

Kinser raced at Rolling Wheels for the first time in 2004, finishing 10th, which is one of four-career top-10 finishes he has earned at the sprawling five-eighths-mile in New York, located just outside of Syracuse. Last season, he came home 10th in the spring at the track and was 15th in the fall during Super DIRT Week. Kinser finished a career-best fourth in the fall of 2010, leading several laps of the main event. He has raced once on a five-eighths-mile in 2013, winning at Orange County Fair (N.Y.) Speedway in May.

“We had a good set-up for Orange County (Fair Speedway) and a lot of what worked there should help at Rolling Wheels (Raceway Park),” Kinser said. “You carry a lot of speed around Rolling Wheels, but without a lot of banking, you have to really be calculated in where and when you pass. We’ve always run pretty good there and it’s a place I enjoy racing at.”

Entering the second East Coast swing of the season, Kinser is 10th in points with the World of Outlaws STP Sprint Car Series. He has won once and has accumulated 22 top-10 finishes, with seven of those being top-five performances.