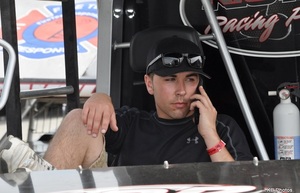 WATERTOWN, Conn.—July 16, 2013— After charging his way through the field in the 30th Kings Royal at Eldora Speedway as well as the Brad Doty Classic last week, David Gravel is more than ready to continue the “Month of Money” this week with the second East Coast Swing of the Season for the World of Outlaws STP Sprint Car Series. In the Kings Royal, Gravel powered from the 19th starting spot to finish ninth, while in the Brad Doty Classic he came from 14th to fifth. He carries that momentum into a five event stretch over the next week in Pennsylvania and New York.

First up for Gravel, who pilots the FMR Racing/JRC Transportation/Musco Fuel/Model Craft J&J, is the Don Martin Memorial Silver Cup Twin 30s at Lernerville Speedway in Sarver, Pa., on Tuesday, July 16. Gravel will then make the trek to Central Pennsylvania and the famed Williams Grove Speedway in Mechanicsburg, Pa., for the Summer Nationals on Friday, July 19 and Saturday, July 20. He’ll then head to New York for the World of Outlaws STP Sprint Car Series annual appearance at Lebanon Valley Speedway on Sunday, July 21 and followed that up with a visit to Rolling Wheels Raceway Park in Elbridge, on Tuesday, July 23.

The Don Martin Memorial Silver Cup will consist of two 30-lap main events, with each paying $15,000 to the winner. The first feature will run under a regular World of Outlaws format, paying full points. The second feature will be lined up by inverting the lead lap finishers from the first main event. Last year in the Silver Cup, Gravel finished fifth in the first feature, after lining up 12th. He was sixth-fastest in time trials and finished fourth in his heat raced to punch his ticket into the main event. The native of Watertown, Conn., finished 19th in the second 30-lapper.

“Lernerville is one my favorite tracks,” said Gravel. “We typically run well there also, so that’s a good thing. The twin features put on a great show for the fans and give us twice as many laps and getting laps on a track like Lernerville never hurts. We had a strong run in the first feature last year and hopefully we can back that up and be up front in both this year.”

Gravel made his most recent start at Lernerville last fall with the UNOH All Star Circuit of Champions, finishing fifth. He opened that night by recording the seventh-quickest lap in qualifying. The 21-year-old finished second with the All Stars at the fourth-tenths-mile in 2011. Gravel was fastest in time trials at Lernerville with the All Stars in 2010. He made his first-career start at the track located just outside of Pittsburgh in 2009.

The Summer National at Williams Grove Speedway will consist of two full racing programs each night. A $20,000-to-win main event will cap the finale on Saturday, July 20. Gravel has made one start at the famed half-mile this season, finishing 17th in May. The second night of that event fell to rain. Gravel made five starts at “The Grove” last year, including earning a spot in the main event of the National Open for the first time in his young career.

“Qualifying is the key at Williams Grove (Speedway),” he shared. “It’s tough to get qualified well there, but it really dictates the rest of your night. The level of competition is so tough at ‘The Grove.’ Usually during the heat races it’s tough to pass, so track position, which comes from qualifying, is that much more important. If you qualify well you put yourself in a position to have a good rest of the night.”

Gravel has raced with the World of Outlaws STP Sprint Car Series at Lebanon Valley Speedway twice in his career. In 2010, he finished seventh at the ultra-high-banked and blazing fast half-mile. Gravel started that night by turning the fourth-fastest lap in time trials. He finished third in the first heat race to earn a spot in the dash where he came home sixth. The East Coast racer made his first start with the series at Lebanon Valley in 2008.

“It’s been a few years since I’ve been to Lebanon Valley (Speedway), so I’m looking forward to getting back there,” he noted. “That’s the closest track to home, so we’ll have a lot of family and friends there that don’t get to see us race very often. Lebanon Valley is so fast and that’s definitely a place where getting in the dash and starting up front is important.”

The East Coast racer made two starts last season at the sprawling five-eighths-mile Rolling Wheels Raceway Park, which is one of just two tracks that size on the World of Outlaws STP Sprint Car Series schedule. He finished fifth in the fall during Super DIRT Week, after opening the night as the eighth-quickest driver in time trials, followed by a win in the second heat race to earn a spot in the dash. Last spring at Rolling Wheels, Gravel was running second when a heim on the throttle pedal broke and ended his night. He has made one start on a five-eighths-mile track this season, with that coming at Orange County Fair Speedway, also in New York.

“We’ve run up front at Rolling Wheels (Raceway Park) before, so we know what it takes there,” Gravel said. “Both races there last year we had a good set-up and just had some bad luck in the spring race with the part breaking on the throttle. That’s a wide open place and it usually gets pretty slick, so we’ll hopefully be ready for it.”

Gravel enters the second East Coast Swing of the season seventh in the World of Outlaws STP Sprint Car Series standings. He has one win in 2013 and 20 top-10 finishes, with six of those being top-five showings.