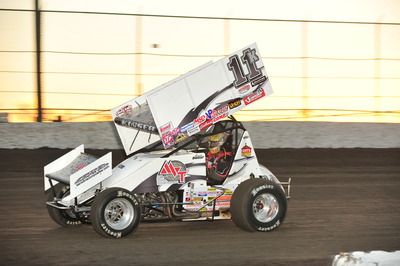 BLOOMINGTON, Ind.— July 3, 2013— There are 31 days in the month of July and Kraig Kinser and his fellow World of Outlaws STP Sprint Car Series competitors will be in action 14 of those days, making it the busiest month of the year for the series. For Kinser, who makes his living behind the wheel, this is a time of the year he always looks forward to. The ultra-busy stretch kicks-off this week at Huset’s Speedway, followed by a pair of races at Dodge City Raceway Park in the Casey’s General Store/Mesilla Valley Transportation Maxim.

The World of Outlaws STP Sprint Car Series annual visit to Huset’s Speedway in Brandon, S.D., is set for Wednesday, July 3. A trip south to Kansas, will find the best sprint car drivers in the world at Dodge City Raceway Park on Friday, July 5 and Saturday, July 6 for the Boothill Showdown.

“Racing with the World of Outlaws this is what you gear up for,” said Kinser. “We’ve already raced quite a bit this year with the expanded schedule, so everyone kind of knows what they have right now. We’ve had our ups and downs this year and our main goal is still to focus on qualifying well, which then puts us in a good sport for the rest of the night with the way the Outlaws race format is laid out.”

Last year at Huset’s Speedway, Kinser finished seventh, which marked his third straight top-10 showing at the high-banked three-eighths-mile located just outside of Sioux Falls. He opened the night by turning the sixth-fastest lap in time trials, followed by a runner-up finish in the third eight-lap heat race to earn a spot in the dash. In the dash, Kinser finished fifth, which put him on the inside of the third row for the 35-lap main event.

The third-generation driver raced for the first time at Huset’s in 2003. Kinser finished a career-best second at the track in 2005. He has made a total of eight starts at the venue in his career, earning four top-10 finishes.

“I’ve had some good runs up at Huset’s over the years,” he shared. “That can be a pretty tricky place sometimes. You carry some momentum around there, but with it being pretty tight you have to make sure you really hit your marks. Huset’s is a place I’ve always enjoyed racing at and it’s the only time of the year we make it to that area, so hopefully we put on a good show.”

Kinser scored his first-career win at Dodge City Raceway Park last season, claiming the finale of the Boothill Showdown. He started on the pole and led all 30 laps to pick up the victory over his father Steve. The third-generation driver has made 13 starts in his career at the high-banked, three-eighths-mile, racking up seven top-10 finishes along the way, with three of those being top-five performances.

“We had a great car on the second night at Dodge City (Raceway Park) last year,” Kinser said. “Starting up front always helps, but you still have to put in 30 good laps and not make any mistakes and hold off the 23 other drivers out there that are shooting for you. We have a good baseline for Dodge City and should be pretty good right off the truck and will make changes as needed throughout the night.”

Entering the 14-race stretch in July, which will feature the “Month of Money,” which begins next week, Kinser is 11th in the World of Outlaws STP Sprint Car Series championship standings. He was victorious earlier this season at Orange County Fair Speedway in New York, and has 17 top-10 finishes, of which six are top-five showings.