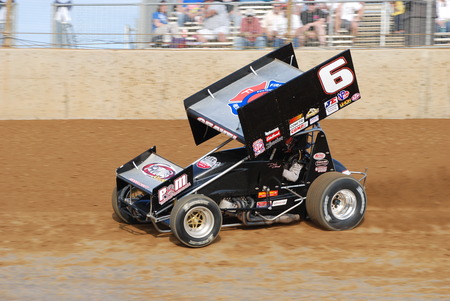 WATERTOWN, Conn.—July 3, 2013— In dead of winter when he is longing to be at the race track or even during the season when Mother Nature gets in the way, week’s like the current one are what David Gravel looks forward to most. Three races in a four-day stretch at a couple of different tracks await the East Coast racer this week in the FMR Racing/JRC Transportation/Musco Fuel/Model Craft J&J. This continues a span of five consecutive weeks that will see the World of Outlaws STP Sprint Car Series race at least three times a week.

The World of Outlaws STP Sprint Car Series will make their annual appearances at Huset’s Speedway in Brandon, S.D., on Wednesday, July 3. The series then heads to Kansas for the Boothill Showdown at Dodge City Raceway Park on Friday, July 5 and Saturday, July 6. Over the course of the month of July, the series will contest a total of 14 feature races.

“You have to have your ‘A-Game’ this time of the year with how much we race,” Gravel said. “If you struggle you can lose a lot of ground, so you can’t afford to do that. You have to be really prepared, which I think we are. And you also have to be really good each night and that begins with hot laps and time trials and making the most of the laps you have on the track early in the night.”

Gravel competed at Huset’s Speedway last season with the UNOH All Star Circuit of Champions during the Thunder Through the Plains mini-series, finishing third at the high-banked, three-eighths-mile. The 21-year-old opened the night at Huset’s by turning the eighth-fastest lap in time trials. He finished fourth in a heat race to earn a spot in the dash where he came home fifth, which put him on the inside of the third row for the start of the main event. Gravel has four career top-10 finishes at the track, with the first pair of those coming in 2010 with the All Stars.

“Huset’s (Speedway) is a great track and I’ve had some good runs there in the past,” he shared. “I’m looking to get qualified well, make it into the feature through the heat and hopefully get in the dash. It seem like good things usually happen when you start closer to the front of the field in the feature.”

Dodge City Raceway Park will mark the 19th new track and second in the state of Kansas, that Gravel has visited this season with the World of Outlaws STP Sprint Car Series. The high-banked, three-eighths-mile has been hosting the series since 2004. Gravel has made nine starts on tracks that size this season, winning at I-94 Speedway in Minnesota, on June 22.

“It will nothing different going to a new track,” Gravel noted. “We’ve been to plenty of new tracks this year and I love going to new places. I hear Dodge City (Raceway Park) is a great track, so I’m looking forward to getting there. It sounds like a momentum-type track with the banking, so we should carry some good speed around there.”

Gravel, who has made 37 starts with the World of Outlaws STP Sprint Car Series this season, is seventh in points. He has one victory to go along with 17 top-10 finishes, of which five are top-five performances.