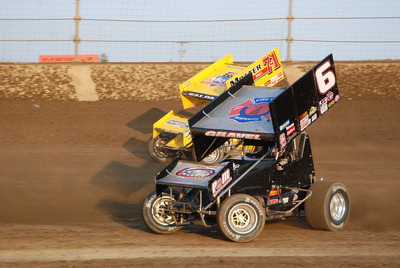 WATERTOWN, Conn.—June 26, 2013— David Gravel is a racer — plain and simple. He’ll race anywhere, anytime, and feels like he is at his best the more he races. This weekend, the native of Watertown, Conn., will get to race three straight nights with the World of Outlaws STP Sprint Car Series at three tracks that will test his versatility, with one being LaSalle Speedway in Illinois, where he’ll be making his debut, followed by making his second-career appearance at both Beaver Dam (Wis.) Raceway and Cedar Lake (Wis.) Speedway.

Gravel will kick-off the trio of races on Friday, June 28 at LaSalle Speedway in Illinois, which will be hosting the World of Outlaws STP Sprint Car Series for the first time since 2010. Action then shifts to Wisconsin on Saturday, June 29 for a stop at Beaver Dam Raceway and the running of the Jim Boyd “JB” Memorial. The weekend comes to a close on Sunday, June 30 at Cedar Lake Speedway in New Richmond, Wis. Gravel enters this weekend fresh off his first win of the 2013 campaign on June 22 in Minnesota in the FMR Racing/JRC Transportation/Musco Fuel/Model Craft J&J.

“Our confidence is definitely up right now after the win last weekend,” said Gravel. “We had been close a couple of times this year, so to finally get that first win kind of took a little weight off our shoulders. Everyone always says getting that first win of the year is the hardest, so hopefully we can continue to contend all season and pick up a couple more wins. We’ll just keep working hard and try to continue to put ourselves in good positions.”

The event at LaSalle Speedway will mark Gravel’s first-ever start in the state of Illinois. LaSalle is a high-banked, quarter-mile, and Gravel has raced on a track that size three times thus far in 2013. He finished second at Tri-State (Ind.) Speedway on April 20 and was sixth, after running as high as second at Silver Dollar Speedway in Chico, Calif., in March. He made his most recent start on a quarter-mile at Kokomo (Ind.) Speedway earlier this month.

“Since I’ve never been to LaSalle, we’ll try to compare it to somewhere I’ve been when we get there and I get a chance to look over the track,” he shared. “It always helps that my crew chief (Tyler Swank) has been to just about all of these places. We’ll start the night with a set-up that has worked on the smaller tracks so far this year and go from there.”

Gravel made his debut at Beaver Dam Raceway last season with the World of Outlaws STP Sprint Car. He finished 13th at the high-banked, third-mile, following a 17th-place starting spot in the 40-lap main event. The now 21-year-old opened the night as the 17th-fastest qualifier and used a sixth-place finish in the second heat race to earn a spot in the main event.

“I ran okay at Beaver Dam (Raceway) last year and learned a lot about that track,” Gravel stated. “It was really heavy in time trials and then it slicked off in the feature. We’ve had some success on the smaller high-banked tracks this year, so we should have a good baseline when we roll off the truck up there.”

In his maiden voyage to Cedar Lake Speedway, Gravel finished second, which was his best World of Outlaws STP Sprint Car Series showing of 2012. He was fastest in time trials of the 28 entries, lapping the high-banked, three-eighths-mile in 11.027-seconds. He finished fifth in the first heat race, which put him in the dash where he lined up sixth and came home seventh. He charged from the inside of the fourth row in the A-Feature to score the runner-up finish.

“We qualified well at Cedar Lake (Speedway) last year and that really set us up for the rest of the night,” he explained. “The car was really strong in the feature and we were able to pass quite a few people. I would have liked to have passed one more car, but to finish second with the Outlaws is nothing to hang your head about, either.”

Gravel, who is the leading contender for the Kevin Gobrecht Rookie of the Year Award with the World of Outlaws STP Sprint Car Series, is currently seventh in points on the strength of 15 top-10 finishes with five of those being top-five performances, including his first win of the season last weekend at I-94 Speedway in Minnesota.

“If we can finish in the top-10 all three nights coming up, that will be a good weekend for us,” Gravel said. “It would be good to get another podium finish or two as well. The competition is so tough right now that you have to really be on your game and ready for everything. You never know when you’ll have bad night, but the good thing is there is always another race around the corner to get on the right path if you do have trouble. We’re excited right now to get back to the track and carry the momentum from last weekend.”